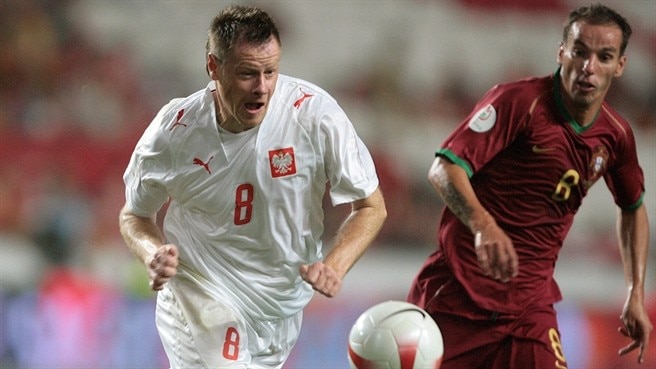 Poland's Jacek Krzynówek scored a late equaliser in Portugal to keep his team two points clear at the top of UEFA EURO 2008™ qualifying Group A.

Portugal denied
The visitors went ahead through Mariusz Lewandowski just before half-time but Maniche levelled for Portugal five minutes after the interval. Cristiano Ronaldo then looked to have sealed a home win, before Krzynówek's fortuitous late strike rescued a draw and left Portugal two points adrift of second-placed Finland.

Poland ahead
Although Ronaldo and Simão caused early problems for the Poland defence, it was Nuno Gomes who had the first real chance on 26 minutes after a fine pass from Deco; Artur Boruc saving at his feet. A minute later, Ronaldo fired a stinging drive against the bar while Poland came close at the other end six minutes later, Euzebiusz Smolarek shooting just over. A minute before half-time, goalkeeper Ricardo parried Jakub Błaszczykowski's effort from the edge of the area but Lewandowski was at hand to put Poland ahead.

Home team rally
Portugal reacted quickly after the interval and Nuno Gomes got in behind the Poland defence to set up Maniche, who gratefully drove past Boruc after the goalkeeper had failed to clear the danger. Nuno Gomes almost added a second goal seven minutes later after good work from Bosingwa, but this time Boruc was alert to the threat and intercepted. After Nuno Gomes had been replaced by Ricardo Quaresma, the substitute charged down the right and crossed for Simão. He missed his header yet the ball fell kindly for Ronaldo who volleyed past the helpless Boruc.

Late leveller
With two minutes to go, however, Krzynówek’s long-range attempt went in off a combination of the post and Ricardo's shoulder. Poland visit second-placed Finland on Wednesday while Portugal welcome Serbia with both teams very much in striking distance.