Poland make a point in Helsinki

Published: Wednesday 12 September 2007, 23.41CET
Finland 0-0 Poland Poland moved a step nearer qualification with a draw against a Finland side who could still reach the finals. 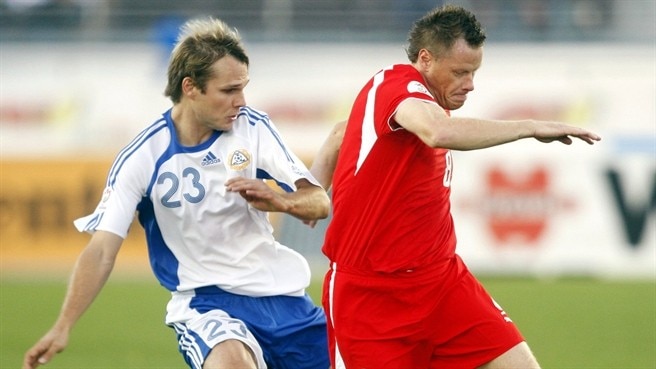 Poland make a point in Helsinki

Finland 0-0 Poland Poland moved a step nearer qualification with a draw against a Finland side who could still reach the finals.
Read more

Group A leaders Poland moved a step closer to qualifying for UEFA EURO 2008™ with a goalless draw against a Finland side who could yet join them in the finals.

Boruc resistance
A sell-out crowd at Helsinki's Olympiastadion roared on the second-placed hosts, who are seeking to qualify for a major tournament for the first time – but they could find no way past Poland goalkeeper Artur Boruc. Finland custodian Jussi Jääskeläinen was also kept busy in a pulsating game in which both teams hit the woodwork.

Early chances
The home side had looked nervous early on, allowing Poland to create two opportunities, both of which were squandered by Mariusz Lewandowski. Finland finally offered a threat shortly after the half-hour when Alexei Eremenko Jr forced a smart stop from Boruc. The Celtic FC player had to be alert again three minutes later to deny Daniel Sjölund while Poland responded with efforts from Jacek Krzynówek and Euzebiusz Smolarek.

Smolarek opportunities
Leo Beenhakker's men had an excellent chance to open the scoring within four minutes of the restart but, following good work from Jakub Błaszczykowski, Smolarek could not get enough power on his shot to beat Jääskeläinen. Smolarek came close again when his chipped attempt was kept out by the impressive keeper. Having spent a long period on the back foot, Finland went within centimetres of taking the lead on 68 minutes when Eremenko's close-range shot struck a post.

Frantic finish
The hosts menaced again as Eremenko crossed for Jonatan Johansson but the striker's header flashed over the bar from 12 metres. Then Poland's Marek Saganowski rattled the woodwork before both sides nearly won the match in a frantic finish – Błaszczykowski going close for Poland and Sjölund seeing a late effort blocked. The result maintained Poland's two-point buffer over Finland in Group A.