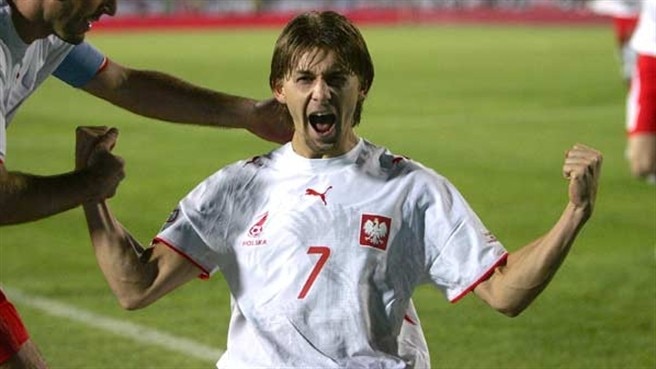 Poland 3-1 Kazakhstan Euzebiusz Smolarek's second-half hat-trick helped the home side come from behind to stay four points clear in Group A.
Read more

Euzebiusz Smolarek's second-half hat-trick helped Poland come from behind to defeat Kazakhstan in Warsaw and stay four points clear at the top of UEFA EURO 2008™ qualifying Group A.

Second-half revival
The home side had fallen behind midway through the first half at the Legia Stadium as Dmitriy Byakov gave Kazakhstan a shock lead, before Smolarek levelled eleven minutes into the second period. The Real Racing Club Santander forward put his team in front five minutes past the hour and sealed the win with his third goal a minute later. Leo Beenhakker's men now have 24 points and next play Belgium at home on 17 November, while Kazakhstan welcome second-placed Portugal on Wednesday.

Byakov breakthrough
Poland started the better but struggled to break down the visitors' defence, with Marek Saganowski shooting straight at David Loria and Smolarek sending a long-range effort too high. However, when the first goal did arrive it came at the other end in the 20th minute. Sergey Larin crossed from the left and Byakov's left-foot shot found the bottom corner. Poland attempted to rally with Saganowski unleashing several attempts from distance, Loria saving one and being rescued by his post having been beaten by another.

Smolarek strikes
Nurbol Zhumaskaliyev might have increased the Kazakhstan advantage before half-time, heading a corner over, before play was brought to a temporary halt by a floodlight failure early in the second half. When it resumed, the home side equalised in the 56th minute as Jacek Krzynówek picked out Smolarek with a right-wing centre and the striker found the top corner from the edge of the area.

Spoils secured
Nine minutes later Poland were ahead. Substitute Maciej Żurawski was the provider, delivering an outswinging right-wing corner that Smolarek diverted into the bottom corner. His hat-trick, and Poland's victory, was completed a minute later as Smolarek again benefited from Żurawski's creativity, collecting a pass to shoot in from near the penalty spot.