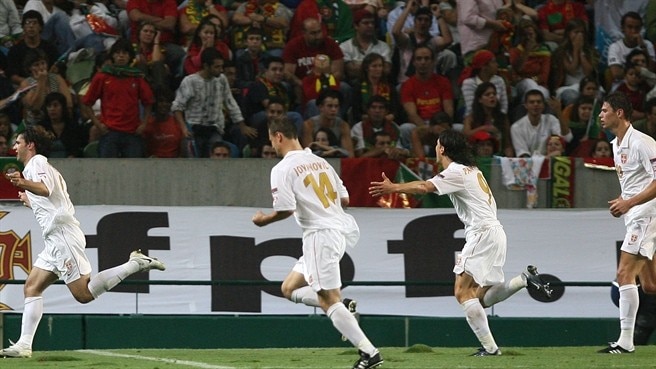 Serbia boosted their qualifying chances in UEFA EURO 2008™ Group A with this emphatic away victory in Azerbaijan.

Shot in the arm
A Nikola Žigić double and further strikes from Duško Tošić, Boško Janković, Milan Jovanović and Danko Lazović kept the visitors to Baku within three points of second place in the section. Samir Aliyev's goal had briefly moved Azerbaijan back into contention at 2-1 down, but it was not to be for Group A's bottom team.

First-half flurry
With Javier Clemente's Serbia needing a win to stay on the coat-tails of second-placed Portugal, they took the lead as early as the fourth minute when Tošić tucked the ball under goalkeeper Farkhad Veliyev following a one-two with Žigić. The advantage was doubled on 22 minutes, courtesy of a Žigić tap-in from Zdravko Kuzmanović's cross, yet was promptly reduced as Aliyev finished emphatically after a defensive mix-up between Tošić and Milan Biševac.

Late show
The relief for Shakhin Diniyev's team was temporary, however. Midfielder Janković smashed in a free-kick shortly before half-time, and 60 seconds later, attacking totem Žigić made it 4-1 having rounded the keeper. Serbia had to wait until 15 minutes from time for their next goal, with substitute Jovanović shooting in from outside the box. Another replacement, Lazović, made it six when he turned the ball in after 84 minutes. For Serbia, the dream is still alive.