Published: Sunday 18 November 2007, 0.03CET
Finland 2-1 Azerbaijan
The hosts left it late to overturn a one-goal deficit and secure the lifeline of a win over Azerbaijan in Group A. 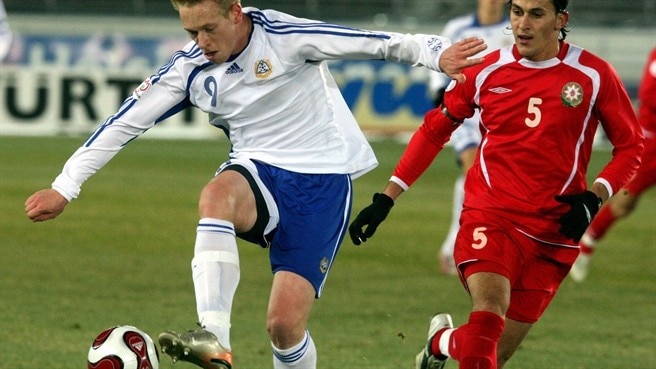 Finland 2-1 Azerbaijan
The hosts left it late to overturn a one-goal deficit and secure the lifeline of a win over Azerbaijan in Group A.
Read more

Finland left it late to overturn a one-goal deficit and grab the lifeline of a 2-1 victory over Azerbaijan in qualifying Group A.

Come-from-behind win
A dominant Finland side were shocked to fall behind to Makhmud Gurbonov's 63rd-minute goal, yet recovered to score twice in the closing eleven minutes through Mikael Forssell and then substitute Shefki Kuqi.

Narrow margin
Roy Hodgson's men had started the day in fourth place in their UEFA EURO 2008™ qualifying group, behind Poland, Portugal and Serbia. And with a trip to Portugal to follow on 21 November, they had no margin for error. So missed chances in the first half from Hannu Tihinen and Teemu Tainio did not augur well. Tihinen also struck the crossbar with a header two minutes after half-time following a corner from the dangerous Daniel Sjölund.

Shock goal
The home team were cursing their luck even louder after Joonas Kolkka had curled a shot beyond Azerbaijan goalkeeper Farkhad Veliyev but against a post. Because seven minutes later Gurbonov fired the visitors into the lead in Helsinki, shooting into the top corner to give Gjokica Hadzievski's men hope of repeating their 1-0 home win against the Finns.

Super subs
Inevitably, the hosts rallied. Kolkka smashed a volley into the face of defender Samir Abbasov. Forssell left a more indelible mark on the match by blasting in the equaliser on 79 minutes after Tihinen had headed a Kolkka free-kick back across goal. Then Kuqi, an 80th-minute substitute, took only six minutes to complete the rescue act of Finland's EURO challenge. The talismanic Jari Litmanen had also come off the bench and his free-kick was turned in by Kuqi, with goalkeeper Veliyev caught out.