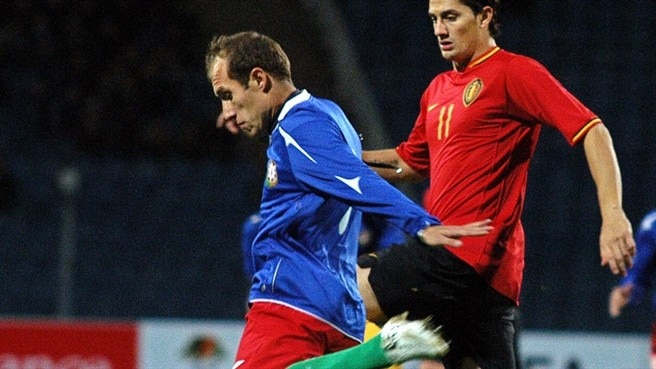 Azerbaijan 0-1 Belgium
Luigi Pieroni scored the only goal in Baku to seal Belgium's fifth win of a disappointing Group A attempt.
Read more

Luigi Pieroni scored the only goal in Baku to seal Belgium's fifth win of a disappointing UEFA EURO 2008™ qualifying campaign.

Azerbaijan bottom
The visiting side enjoyed the better of the play at the Tofikh Bakhramov-Republic Stadium and Pieroni got their reward on 53 minutes. René Vandereycken's team finish fifth in Group A, with Azerbaijan bottom on five points from their 12 games.

Pieroni goal
Belgium broke the deadlock after the interval when Pieroni pounced with an opportunist goal. Azerbaijan defender Rail Melikov blocked a header but Pieroni seized on the rebound and turned the ball into the bottom left corner. The 27-year-old missed an opening to double the advantage in the 65th minute when he screwed a close-range attempt wide after finding space in the box.

Late misses
Belgium controlled possession as the game wore on and it was not until the 85th minute that Azerbaijan finally worked a meaningful opportunity. Substitute Leandro Gomes got himself into a good position on the edge of the area yet shot wide. When, in added time, Branimir Subašić blazed over from a matter of metres, Azerbaijan's final chance had gone.