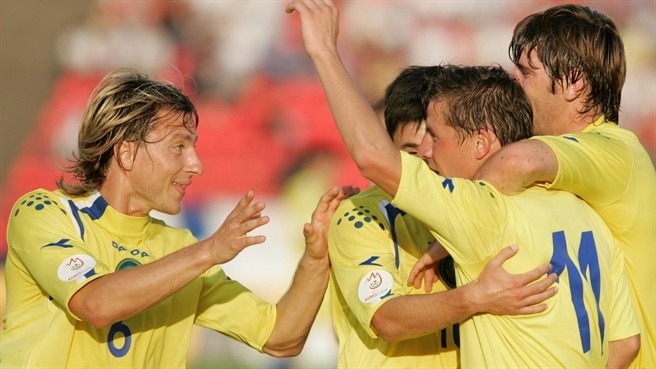 Sergey Ostapenko's first international goal earned Kazakhstan a victory in Yerevan which took the visitors above Armenia in UEFA EURO 2008™ Group A.

Kazakh success
The 21-year-old's second-half strike came against the run of play and gave Kazakhstan only their second win of the qualifying campaign.

In control
Armenia had threatened to take control early on when Robert Arzumanyan shot wide following an Artur Voskanyan free-kick. Although Ostapenko tested Armenia keeper Roman Berezovsky's reflexes soon after, the home team continued to dictate matters. Karen Dokhoyan fired over when well-placed before an effort from Levon Pachajyan skimmed the top of the crossbar close to half-time.

Perfect response
The traffic carried on towards the Kazakhstan goal at the beginning of the second period, with a Samvel Melkonyan attempt flying just the wrong side of an upright. Ostapenko provided the perfect response for Arno Pijpers' men, first by demanding a save from Berezovsky following a Sergey Larin centre, then by blasting the ball beyond the Armenia keeper from the edge of the area.

Armenia low
Armenia came close to equalising soon after through an Artavazd Karamyan free-kick. However, the team now led by Vardan Minasyan following the death of coach Ian Porterfield could not prevent their campaign ending on a glum note. Armenia, who had won 2-1 in Kazakhstan in June, finished on nine points from 12 matches – having been unable to fulfil their two fixtures against Azerbaijan. The Kazakhs have ten points and a game still to play in Serbia.