Published: Wednesday 12 September 2007, 23.31CET
Bosnia-Herzegovina 0-1 Moldova The home side's hopes of qualifying for their first major finals suffered a setback with a home defeat by Moldova. 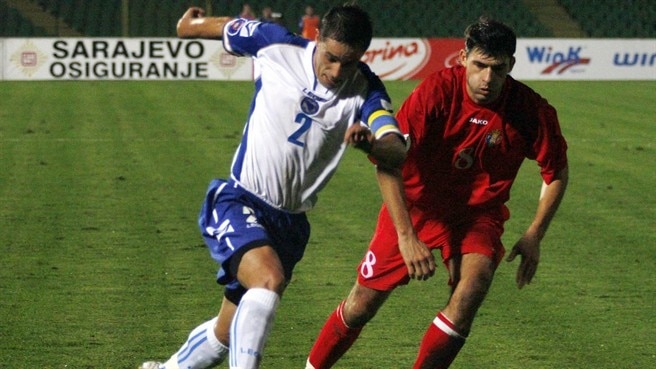 Bosnia-Herzegovina 0-1 Moldova The home side's hopes of qualifying for their first major finals suffered a setback with a home defeat by Moldova.
Read more

Bosnia-Herzegovina's hopes of qualifying for their first major finals suffered a major setback with a home defeat by Moldova.

Bugaev winner
Igor Bugaev scored the only goal of the game midway through the first half and his team held on for their first UEFA European Championship away win since their very first match in the competition, in Georgia in September 1994. Bosnia-Herzegovina, already reeling from a 1-0 loss in Hungary on Saturday, are now four points adrift of second place in Group C with only three games left.

First-half goal
Moldova had the first chance after nine minutes but Bugaev's shot lacked the power to beat home goalkeeper Adnan Gušo. On 22 minutes, however, the breakthrough came: Bugaev turning in Alexandru Gatcan's pass from the right. That did not stop Moldova attacking and Gušo was forced to save an Alexandru Epureanu free-kick from distance, before defender Safet Nadarević got in the way of an Anatolie Doros effort. The home side finally registered an attempt on goal four minutes before the break, Dragan Blatnjak's shot prompting a fine save from Moldova keeper Nicolai Calancea. Gatcan almost made it 2-0 before half-time, while at the other end, Calancea frustrated Džemal Berberović.

Home side denied
Though Bosnia-Herzegovina pressed forward from the start of the second half, they were nearly caught out when Victor Comlenoc led a counterattack and hit the post. Now the hosts increased their efforts, with Zlatan Muslimović firing over and Edin Džeko going agonisingly close. Moldova's Calancea kept out a Džeko header and deep in injury time Berberović rattled the woodwork before being denied by the goalkeeper. Moldova remain bottom but will hope to put that right against Turkey or Malta in October, when Bosnia-Herzegovina face fellow contenders Greece and Norway.