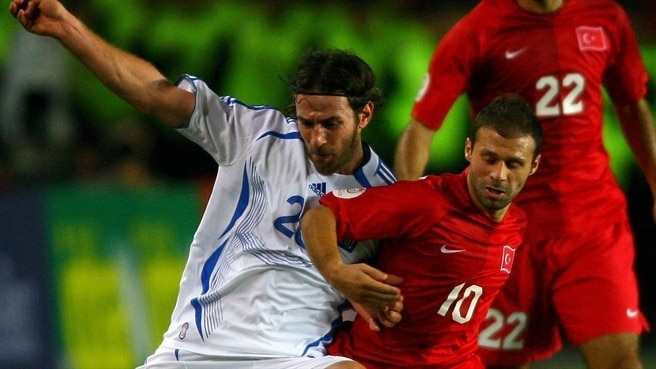 European champions Greece will continue the defence of their title at UEFA EURO 2008™ after qualifying from Group C with victory against rivals Turkey.

Revenge mission
Ioannis Amanatidis scored the only goal in the 79th minute as Otto Rehhagel's side overcame a hostile atmosphere in Istanbul to avenge their 4-1 home defeat by Turkey earlier in the campaign.

Trade of attacks
Greece dominated the early exchanges, twice coming close to the breakthrough when Amanatidis and Theofanis Gekas had good efforts saved by Turkey goalkeeper Volkan Demirel. Fatih Terim's team then began to come into the game with Hamit Altıntop involved in their best work. The flying full-back saw one stinging shot blocked and another fly just off target. Gökdeniz Karadeniz also came close, being denied by a fine stop from Greece keeper Konstantinos Chalkias. Even so, the visitors should have gone ahead on the stroke of half-time when Amanatidis's strike was deflected to safety and Gekas headed wide the resulting corner.

Greece press
The contest continued in the same open and entertaining fashion after the break. Greece midfielder Georgios Karagounis curled an effort just wide from distance on 50 minutes, and Turkey defender Servet Çetin nodded over at the other end. Karagounis had another attempt parried by Demirel while Greece substitute Georgios Samaras drove wide before the deadlock was finally broken.

Amanatidis winner
Samaras picked out the advancing Amanatidis and the forward kept his cool to clip the ball over Demirel and into the net. Turkey almost drew level with four minutes remaining, but substitute Arda Turan's angled shot hit the post. Greece qualify with two matches to spare, leaving Norway and Turkey to vie for second spot.