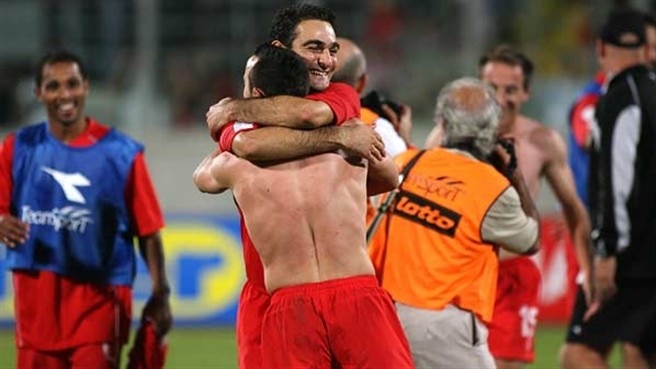 Andre Schembri etched his name into Malta's history books, scoring twice as the island side picked up their first UEFA European Championship victory since 1982 with a 2-1 win against ten-man Hungary in Group C.

Torghelle equaliser
Schembri had never scored for Malta before, but got off the mark at the Ta' Qali Stadium with a simple tap-in on 14 minutes. It set the home team on course for a famous triumph, their first in competitive football for 13 years, although they soon found themselves level as Sándor Torghelle hit back for Hungary. The visitors' revival effectively ended with Vilmos Vanczák's dismissal before half-time, and Malta took advantage of their superior numbers when Schembri slotted in his second soon after the restart to spark jubilant scenes.

Mifsud marvels
While the obvious praise went to Schembri, it was Michael Mifsud who did most to unsettle a Hungary side seeking their second win in four UEFA EURO 2008™ qualifiers. A vibrant presence in the opening exchanges, the Lillestrøm SK striker broke through before the quarter-hour, unleashing a low shot that goalkeeper Gábor Király could only push on to the post and Schembri tucked in the rebound. Four minutes later, Hungary were level as Torghelle headed in Szabolcs Huszti's pinpoint cross.

Rare triumph
Vanczák's sending-off on 38 minutes then turned the game again, as he was penalised for a foul on the ever-dangerous Mifsud. Schembri salted the wound when he made it 2-1 eight minutes after the restart, latching on to Gilbert Agius's through-ball and burying it in the corner of the net. It was enough to secure a first win in this competition since Malta beat Iceland by the same scoreline in June 1982 - and only a third-ever victory having also defeated Greece 2-0 in 1975. They must wait until March before attempting to make it four, when they play Moldova, whom Hungary also face in their next outing in the new year.