Turkey storm to victory in Athens

Published: Sunday 25 March 2007, 0.59CET
Greece 1-4 Turkey Turkey came from behind to earn an emphatic win in Greece that has put them in the Group C driving seat. 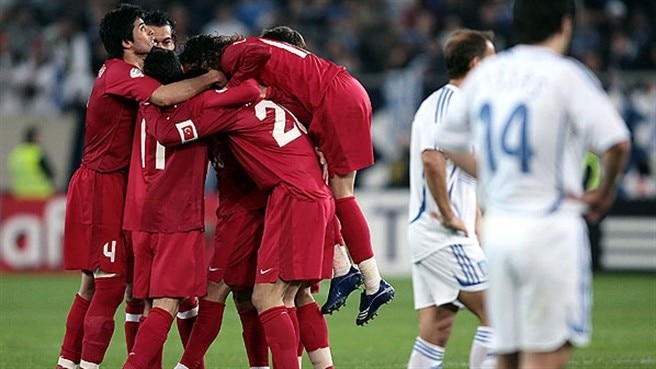 Turkey celebrate during their win in Greece ©Getty Images

Turkey storm to victory in Athens

Greece 1-4 Turkey Turkey came from behind to earn an emphatic win in Greece that has put them in the Group C driving seat.
Read more

Turkey fought back from a goal down to earn an emphatic UEFA EURO 2008™ qualifying win in Greece that puts them in the driving seat in Group C.

Turnaround
After falling behind to their Aegean rivals within five minutes, goals from Tuncay Sanli, Gökhan Ünal, Tümer Metin and Gökdeniz Karadeniz turned the game around to move the Turks three points clear of their opponents in the pool.

Greek opener
European champions Greece had begun brightly and when Turkey failed to clear a corner, the Greece midfield were quick to pick up the ball and play it into the path of defender Sotirios Kyrgiakos, who crashed a shot into the net from close range. The lead could have been doubled soon after when a fizzing drive by Georgios Karagounis flew straight to Volkan Demirel, while at the other end Tuncay and then Sabrı Sarıoğlu hit wayward efforts into the crowd.

Equaliser arrives
The equaliser arrived for Turkey in the 27th minute, however. A free-kick from his own half by Tümer reached Sabrı on the right and his neat cross was too good for the Greece defence, with Tuncay doing well to hit a powerful right-foot shot beyond Antonios Nikopolidis. The visitors further outlined their attacking intentions directly after the restart when Tuncay nodded narrowly over, before Gökhan fired them ahead with a powerful strike from the edge of the box on 55 minutes.

Goals flow
Then, in the 70th minute, it was three, Tümer's low strike from outside the area nestling into the bottom corner, giving Nikopolidis no chance. And there was still time for substitute Gökdeniz to grab a fourth, pushing the ball in from close range nine minutes before the whistle. Turkey next face Norway at home on Wednesday, when Greece visit Malta looking to bounce back from their first defeat.