Greece on course with Oslo draw 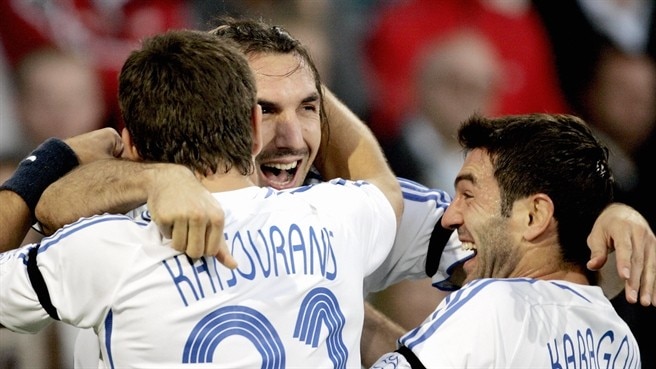 Greece on course with Oslo draw

Two goals by Sotirios Kyrgiakos helped Greece's prospects of defending their European title in Austria and Switzerland, with a hard-earned away draw against in-form Norway.

Kyrgiakos double
Otto Rehhagel's side seem to be rekindling in qualifying the form that made them surprise winners at UEFA EURO 2004™ – the kind of form that eluded them when they missed out on last summer's FIFA World Cup. Twice the Group C leaders went ahead in the Norwegian capital through Kyrgiakos but Norway equalised on each occasion, through John Carew and a magnificent strike from John Arne Riise. The draw kept Greece top of a pool in which Turkey, Norway and Bosnia-Herzegovina remain in contention for the two qualification spots.

Carew equaliser
The visitors started well, requiring only seven minutes to take the initiative. A corner by Georgios Karagounis was flicked on and Kyrgiakos was there to head in the opener. Norway immediately hit back and Konstantinos Chalkias did well to tip a Morten Gamst Pedersen shot behind for a corner. But on the quarter-hour mark Carew restored parity, rising to nod in a Riise cross.

Riise strike
On the half-hour Kyrgiakos made it 2-1 for Greece when he netted from close range after goalkeeper Håkon Opdal had kept out his initial header from a Karagounis delivery. Norway again pulled level though: Riise scoring superbly after collecting a Jan Gunnar Solli pass. At the other end, Nikolaos Liberopoulos hit the bar early in the second half while Karagounis also went close.

End to end
Åge Hareide's men had several further chances, most notably when Pedersen shot wide, and they could have won late on when Riise forced another save from Chalkias before Martin Andresen's goalbound effort was deflected to safety. Greece themselves almost stole the points at the death as Liberopoulous again struck the woodwork but an exciting match ended all square.