Iversen treble not enough for Norway 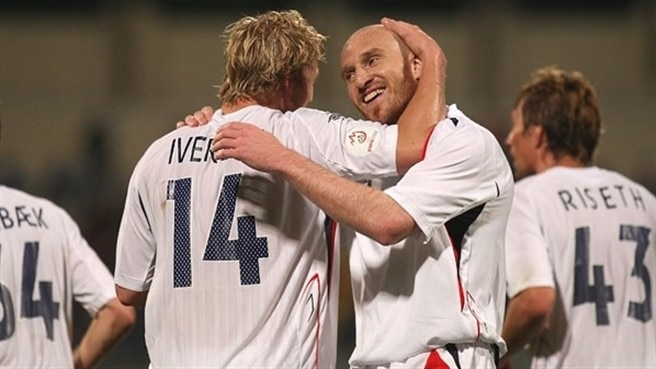 Steffen Iversen is congratulated after scoring against Malta ©Domenic Aquilina

Iversen treble not enough for Norway

Steffen Iversen scored a first-half hat-trick as Norway crushed Malta – but it was not enough to propel Åge Hareide's side to UEFA EURO 2008™.

Iversen hat-trick
The Norwegians needed to win while hoping Bosnia-Herzegovina could break a losing streak against Turkey. In the event, Hareide's team comfortably kept their part of the bargain but Turkey did enough to finish second in Group C. Iversen broke the deadlock 25 minutes in, grabbed a second from the penalty spot three minutes later, then killed off the tie on the stroke of half-time. Michael Mifsud reduced the deficit after the break, though that was tempered by Andre Schembri's 67th-minute red card and Morten Gamst Pedersen's strike to make it 4-1.

Torrid opening
Iversen set the trend with a narrow miss one minute in and Jarl André Storbæk kept up the pressure with a 35-metre piledriver two minutes later. Attempts from Bjørn Riise and John Arne Riise followed as Norway put Malta through a torrid first ten minutes. And it was no surprise when Iversen headed the opener from Storbæk's right-wing cross. A second arrived soon afterwards when Jamie Pace brought John Carew down in the area, and Iversen netted from the spot.

Short-lived recovery
That sparked something of a resurgence from Malta, for whom Pace nearly amends when his 25-metre drive brought a fingertip save from Håkon Opdal. The fightback was short-lived, though, and truly quelled when Iversen smashed in his hat-trick goal from John Arne Riise's cross a minute before the interval. Mifsud pulled one back eight minutes after the restart with a low strike from the edge of the box. However, Schembri then saw red for a second bookable offence and Pedersen's header from Per Ciljan Skjelbred's centre 15 minutes from time ended the contest.