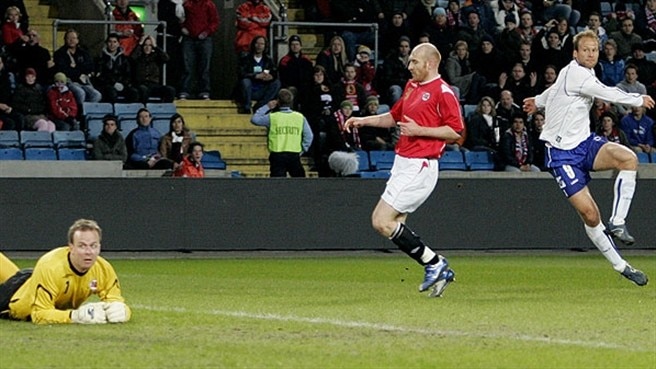 Bosnia-Herzegovina boosted their chances of qualifying for UEFA EURO 2008™ with a hard-fought victory over Norway in Oslo.

Bosnians third
First-half goals from Zvjezdan Misimović and Zlatan Muslimović did the damage for the visitors, who leapfrogged their opponents to take third place in Group C. Norway's reply came from a John Carew penalty, and Åge Hareide's men now face a daunting trip to Turkey on Wednesday as they bid to keep their qualification hopes alive.

Smoke delay
The start of the match was delayed as smoke from flares enshrouded the pitch and, when play got under way, the Bosnians were the first to settle with Mirko Hrgović twice threatening Thomas Myhre's goal in the first ten minutes. Norway then had the ball in the back of the net after 13 minutes when Erik Hagen headed in Morten Gamst Pedersen's throw-in, but the referee's whistle had already blown. Five minutes later, Fuad Muzurović's team did open the scoring. Fredrik Strømstad conceded a free-kick after a challenge on Muslimović, and Misimović made the most of the opportunity by curling the ball into the top left corner from 25 metres.

Close finish
Norway pushed hard to get back on level terms yet both John Arne Riise and Carew were denied by impressive saves from Adnan Gušo. Bosnia-Herzegovina duly doubled their advantage in the 33rd minute thanks to Muslimović's strike into the bottom left corner, although Norway reduced arrears five minutes after the interval when Pedersen was felled in the area by Adnan Custovic. Carew stepped up to take the conversion and hammered the ball into the centre of the net, with Gušo diving to his right. Substitute Steffen Iversen should have salvaged a point for his side two minutes from time, but steered Pedersen's set-piece wide from close range.