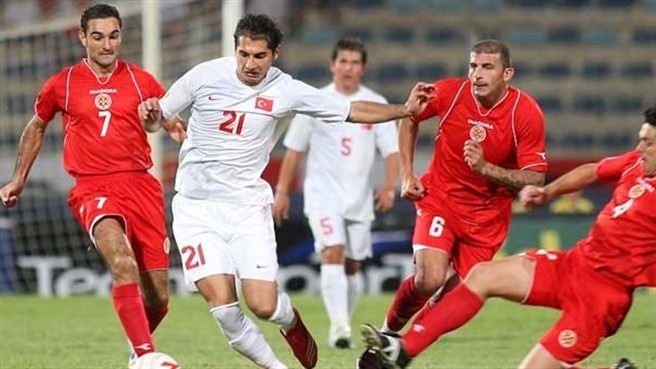 Malta 2-2 Turkey Servet Çetin rescued a Group C point for Turkey in Ta' Qali after the islanders had threatened to register a famous victory.
Read more

Servet Çetin rescued a point for Turkey in Malta after the islanders had threatened to mark the Victory Day public holiday with a famous UEFA EURO 2008™ qualifying win.

'Winning mentality'
Malta have shown signs of improvement under Dušan Fitzel and the Czech coach had called on his players to adopt "a winning mentality" against their more illustrious visitors. Fitzel would have been delighted with the response as Brian Said (41) and Andre Schembri (76) twice put the home team in front, only for Turkey to quickly draw level on each occasion through Halil Altıntop (45) and Servet Çetin (78). Still, it was two points dropped for Fatih Terim's men who are now four points behind leaders Greece after seven Group C outings.

Early action
An exciting game appeared in prospect right from the off in Ta' Qali, as Tuncay Sanli and Michael Mifsud traded early shots off target, although it was Said who truly ignited proceedings: the defender shooting past Hakan Arıkan following Roderick Briffa's corner. Turkey hit back almost immediately, İbrahim Üzülmez crossing from the right for Halil Altıntop to score with a powerful drive.

Stubborn rearguard
After the interval, Turkey began to dominate possession but were unable to find a way past a stubborn Maltese rearguard. Against the run of play, Malta retook the lead with 14 minutes remaining. Mifsud crossed from the left and Schembri drilled a low effort into the corner to send the home fans into raptures. Yet once again their joy was short-lived: Servet Çetin heading in Hamit Altıntop's cross with aplomb. Mifsud could have snatched a late victory for the hosts, but his fine form with Coventry City FC in England deserted the diminutive front man as he shot wide.