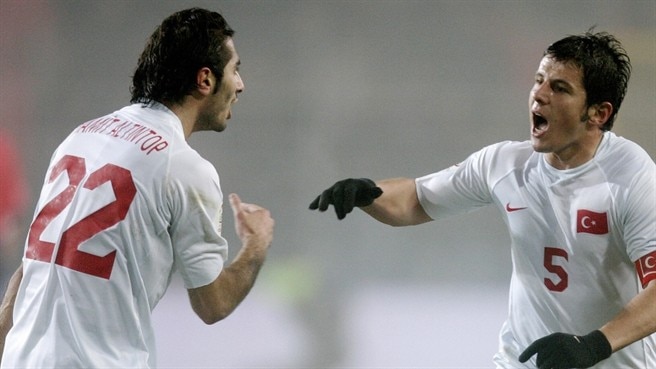 Turkey are favourites to join Greece at UEFA EURO 2008™ from Group C after coming from behind to beat Norway in Oslo and leave the Scandinavian side facing qualifying heartache once again.

Hagen opener
Norway had gone ahead on 12 minutes with a stunning overhead kick from defender Erik Hagen, but Turkey equalised through Emre Belözoglu on 31 minutes before sealing victory courtesy of Nihat Kahveci's strike 14 minutes into the second half.

Turkey press
Norway have not qualified for a major tournament since UEFA EURO 2000™, and after missing out in play-offs for UEFA EURO 2004™ and last summer's FIFA World Cup, they kicked off knowing victory would break that miserable run – earning a place in Austria and Switzerland. It was Turkey, though, who began the brighter, with the lively Hamit Altıntop surging forward and firing a powerful effort just wide on two minutes.

Stunning strike
The foggy conditions did not help the match as a spectacle, but Norway took the lead with a goal of real quality. Steffen Iversen flicked on a free-kick and Hagen, with his back to goal, controlled the ball on his chest before rifling an overhead kick into the roof of the net. John Carew had a header saved as Norway sought a second goal, although Turkey remained dangerous and got back into the game on 31 minutes.

Altıntop impresses
Emre beat his man on the edge of the box, made space and blasted a dipping drive beyond Norway goalkeeper Håkon Opdal. Fatih Terim's men were now in the ascendancy and Altıntop came close again with a long-range attempt on 40 minutes before Morten Gamst Pedersen was thwarted by Turkey keeper Volkan Demirel at the other end.

Nihat winner
The contest was evenly balanced, and Nihat and Iversen both carried a menace early in the second half as the match resumed at a brisk pace. The Villarreal CF forward saw his first effort saved, yet then gave his side a precious advantage on 59 minutes, receiving the ball from substitute Gökhan Gönül before shooting past Opdal. It proved to be the winner, leaving Turkey needing three points at home to Bosnia-Herzegovina on Wednesday to qualify. They are second in Group C, one point above Åge Hareide's Norway who visit Malta with their fate now out of their hands.