No way through for England

Published: Saturday 7 October 2006, 23.41CET
England 0-0 F.Y.R. Macedonia
The visitors gained revenge for their 1-0 defeat in Skopje as they frustrated England in Manchester.
by Paul Saffer 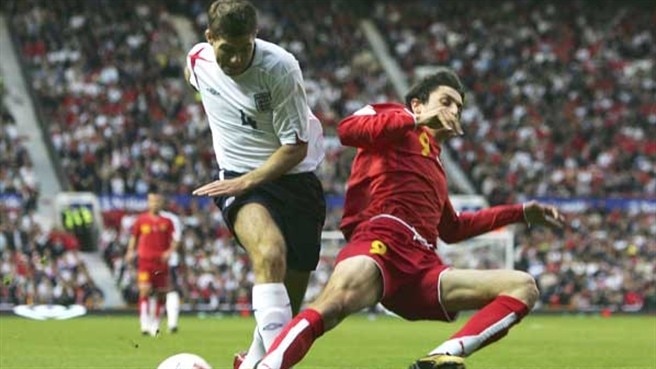 No way through for England

England 0-0 F.Y.R. Macedonia
The visitors gained revenge for their 1-0 defeat in Skopje as they frustrated England in Manchester.
Read more

F.Y.R. Macedonia gained revenge for their 1-0 home defeat in Skopje by England last month as they held on for a deserved draw in UEFA EURO 2008™ qualifying Group E.

Rooney returns
Although England were able to field Wayne Rooney for the first time in the group after suspension, they were without defender Rio Ferdinand through a late injury - Ledley King stood in- and found life difficult against a determined F.Y.R. Macedonia side who had been unlucky to lose the previous encounter. Urged on by a 72,062 crowd at Old Trafford - their largest ever home gate away from Wembley - England dominated the early possession albeit without creating chances.

Visitors threaten
Indeed as the first half drew to a close it was the visitors who were moving forward with purpose. Robert Petrov volleyed wide and England goalkeeper Paul Robinson had to punch the ball away from the head of Velice Sumulikoski in a dangerous position.

Lampard denied
England scored just after half-time in Skopje and they so nearly did so again as Downing's free-kick from the right was headed on target by Frank Lampard but Jane Nikolovski saved. F.Y.R. Macedonia were still threatening, however, and Aleksandar Mitreski only just headed over in the 55th minute while Aco Stijkov, just on as a substitute, forced Robinson to save.

England frustration
There was hope for England when Peter Crouch's header was parried by Nikolovski but with the goalkeeper helpless, Gary Neville shot over. Rooney then expertly controlled a long pass but Nikolovski blocked his shot. Shaun Wright-Phillips came on for Downing with 20 minutes left and immediately called Nikolovski into action.

Gerrard suspended
At the other end Nikolce Noveski rounded Robinson but Ashley Cole hacked the ball away. With five minutes left a Steven Gerrard shot rattled the bar and then Crouch was denied by Nikolovski, meaning the visitors took a point - just as they did in England during UEFA EURO 2004™ qualifying. England go to Croatia on Wednesday without Gerrard, booked for the second time in the group. F.Y.R. Macedonia, three points behind joint-leaders England, visit Andorra.