Published: Saturday 7 October 2006, 22.21CET
Croatia 7-0 Andorra Croatia equalled the largest margin of victory in their history as Mladen Petrić helped himself to four goals in Zagreb.
by Elvir Islamović
from Zagreb 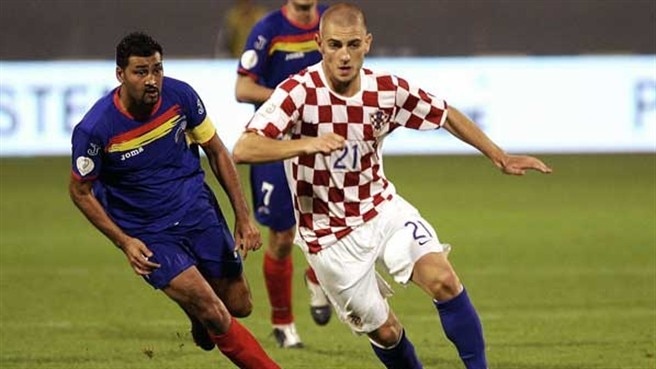 Croatia 7-0 Andorra Croatia equalled the largest margin of victory in their history as Mladen Petrić helped himself to four goals in Zagreb.
Read more

Croatia equalled the largest margin of victory in their history as Mladen Petrić helped himself to four goals against Andorra.

Record matched
Petrić had claimed only one international goal before tonight but was the star man here, and his tally was even more impressive considering he was substituted after 61 minutes. The result is only paralleled in Croatia's record books by a 7-0 friendly success against Australia from 1998.

Bilić bonus
Even without the injured quartet of Darijo Srna, Ivica Olić, Milan Rapaić and Goran Sablić, Croatia were dominant against opponents who had conceded nine goals in their two previous UEFA EURO 2008™ Group E fixtures, while Croatia's opening game produced a 0-0 draw in Russia. Coach Slaven Bilić was taking the chance to explore new tactical options and will have been impressed by Petrić, who could be the long-term successor to the retired Dado Pršo.

Petrić strikes
The FC Basel 1893 forward was first on the scoresheet in the 12th minute as he headed in Niko Kovač's cross. Andorra then held out for another 25 minutes, but Petrić would not be denied any longer as he got his head to Josip Šimunić's flick-on. Three minutes into the second half the hat-trick was completed from distance following good work by Niko Kranjčar, and Petrić's fourth swiftly followed, the provider this time Ivan Klasnić.

Further goals
Klasnić claimed the fifth not long before the hour, Kranjčar and Luka Modrić combining to supply him, and no sooner had Boško Balaban replaced Petrić then he took over the scoring duties to make it six. The record-equalling seventh came late on when Kranjčar set up Modrić, but the real test will come on Wednesday when joint group leaders England visit Zagreb. Andorra welcome F.Y.R. Macedonia hoping to match the 1-0 win they managed against that opposition two years ago for their sole competitive victory to date.