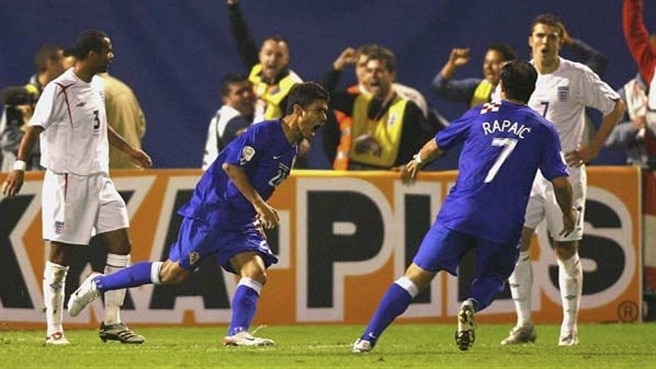 Eduardo da Silva was on target for Croatia ©Getty Images

Croatia made an important move in UEFA EURO 2008™ Group E with victory against England in Zagreb.

Own goal
Eduardo da Silva headed in on the hour and soon after a bizarre Gary Neville own goal put the game beyond England, who had reacted to their 0-0 home draw with F.Y.R. Macedonia by introducing a new 3-5-2 formation. Both teams have seven points but unbeaten Croatia have played a match less and can take the outright lead on 15 November when they go to Israel, while England must wait until March for their next fixture.

Robinson saves
The sides looked evenly-matched in the early stages and it was 24 minutes before the first real chance, with Frank Lampard shooting over. At the other end Milan Rapaić forced Paul Robinson to save with a strong shot. The England goalkeeper was also on hand to deny Niko Kranjčar on the rebound after the initial effort was blocked by Rio Ferdinand.

Croatia ahead
Mladen Petrić scored four times for Croatia in their joint-record 7-0 win against Andorra four days ago and within two minutes of the restart he nearly had his sixth international goal as he got his head to a corner but Robinson tipped the ball over. Seven minutes later England had their best opportunity as Wayne Rooney burst clear but his shot sailed over. It was Croatia who broke the deadlock on the hour, however, after Niko Kovač's high cross from the left was met by Eduardo's looping header which dropped out of reach of Robinson.

England embarrassment
England had not previously conceded since Steve McClaren took over after the FIFA World Cup, but another Croatia goal followed in bizarre circumstances. Neville's backpass seemed innocuous enough but Robinson's kick missed the ball, which rolled into the net. Shell-shocked England never looked like recovering and the last minutes passed in a carnival atmosphere.