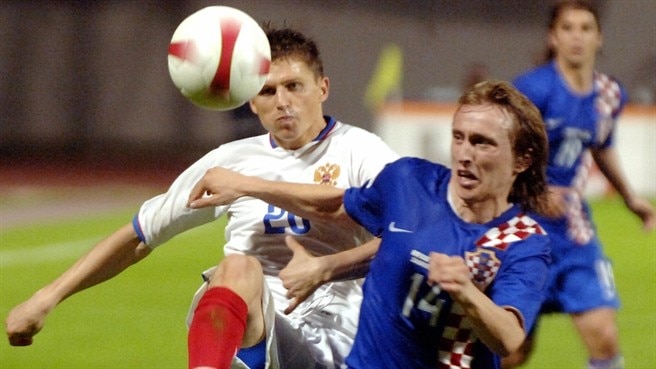 Russia withstood sustained Croatia pressure to hold out for a point in Zagreb which ensured the top of UEFA EURO 2008™ qualifying Group E remained as congested as ever.

Eduardo denied
Croatia were on top throughout at the Maksimir Stadium with Eduardo da Silva twice spurning presentable opportunities, yet they were unable to find the breakthrough that would have strengthened their position at the head of the table. Slaven Bilić's side nevertheless stayed first with 17 points from seven matches, level with Israel having played a game less and two points above Russia. Both teams have home ties next time out, Croatia facing Estonia and Russia taking on F.Y.R. Macedonia on 8 September.

Lively start
The hosts produced a vibrant display, putting Russia on the back foot in the early stages when Josip Šimunić twice went close. Although Darijo Srna limped off to be replaced by Jerko Leko, Croatia refused to be unsettled and Luka Modrić volleyed wide before his cross then gave Eduardo a chance that the striker prodded too high. Aleksandr Kerzhakov's shot which dribbled across goal was the best Russia could muster in the first half and the pattern continued after the interval, home defender Vedran Ćorluka diving to nod Modric's free-kick just wide.

Eduardo denied
A slip by Aleksei Berezutski then let in Eduardo. He rounded goalkeeper Vyacheslav Malafeev but his shot lacked power and Sergei Ignashevich cleared. From the resulting corner, Niko Kranjčar sent a looping header goalwards which was kept out by a scrambling combination of Malafeev, substitute Dmitri Torbinskiy and the crossbar. Bilić underlined Croatia's desire for victory by introducing a third forward in Mladen Petrić, although Russia then mounted a serious threat for the first time with Stipe Pletikosa making a fine stop from a thunderous Ignashevich free-kick. The home team again had the upper hand in the dying seconds, Malafeev punching away a Petrić effort as Russia resisted for a valuable draw.