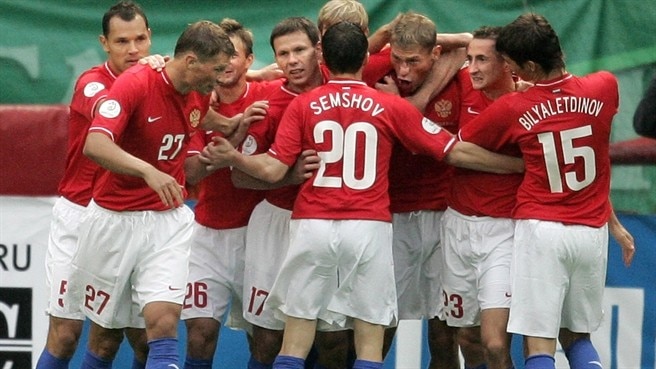 Russia 3-0 F.Y.R. Macedonia Andrei Arshavin and Aleksandr Kerzhakov eased Russia to victory after the visitors had had a second-half penalty saved.
Read more

Late flurry
The Russians took an early lead through Vasili Berezutski and dominated proceedings before having goalkeeper Vladimir Gabulov sent off for a foul in the area which led to Igor Mitreski missing a penalty. Two goals in the last ten minutes, however, secured a home win that keeps Russia in contention around the top of Group E.

Early breakthrough
The hosts went ahead after eight minutes when Goce Sedloski brought down Arshavin and the striker fired over a free-kick from the left for Berezutsky to slot home from 12 metres. The visitors were struggling to get a foothold in the game, being limited to a speculative effort from Goran Popov. Russia, by contrast, had a series of long-range attempts, with Vladimir Bystrov and Konstantin Zyrianov going close.

Off the woodwork
Eventually, the Macedonians settled. Popov tried to beat Gabulov from distance before Vlade Lazarevski forced a save from the keeper with a fine strike. Nonetheless, the chief threat still came from Guus Hiddink's team and Dmitri Sychev made Petar Milosevski work before hitting the frame of the keeper's goal.

Paying the penalty
Yet the complexion of the match could have changed dramatically after 70 minutes. Gabulov brought down F.Y.R. Macedonia substitute Goran Maznov, earning a red card. However, substitute keeper Vyacheslav Malafeev dived to his right to keep out Mitreski's spot-kick. The miss was made worse for Srečko Katanec's side when Arshavin scored from just inside the area on 84 minutes. The same player turned supplier for Kerzhakov soon after with a cross from the right.