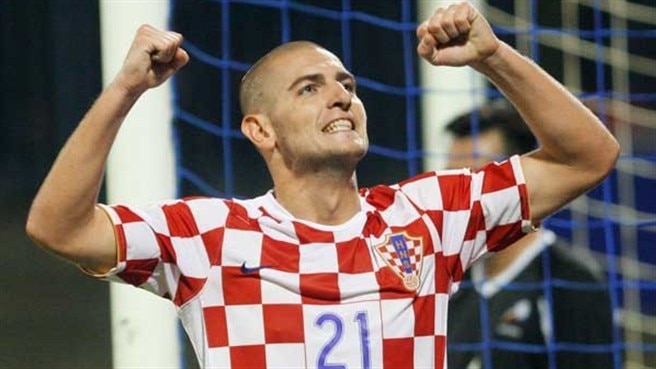 Andorra 0-6 Croatia Three goals in either half helped Croatia consolidate their qualifying Group E lead with a six-goal defeat of Andorra.
Read more

Three goals in either half helped Croatia consolidate their UEFA EURO 2008™ Group E lead in this impressive six-goal showing against Andorra.

Petrić double
Mladen Petrić had scored four goals in the Croatian record-equalling 7-0 home win against David Rodrigo's side last October and the BV Borussia Dortmund player was again on target with two first-half strikes for the visitors. Darijo Srna, Niko Kranjčar, Eduardo da Silva and Ivan Rakitic were the other marksmen on a miserable day for Andorra, compounded by the 77th-minute dismissal of Genís García.

Deadlock broken
There had been little goalmouth action until midway through the first half when Kranjčar shot wide from just outside the area. A minute later, Eduardo headed over the bar from close range as the visitors began to assert their authority. Croatia then went ahead on 34 minutes, when Srna's free-kick deflected off the wall and over the helpless goalkeeper Koldo Álvarez.

Goal flurry
Within four minutes, Slaven Bilić's side had doubled their lead from another set-piece: Petrić curling an exquisite left-footed free-kick past Koldo. The forward then made it 3-0 a minute before the interval with an angled 12-metre drive that crept just inside the far post. After the break, three became four as the unmarked Kranjčar crashed a left-footed strike into the corner from nine metres. And as Andorra's resistance crumbled it was 5-0, Eduardo pouncing from short range after Kranjčar's shot had been blocked on the line on 55 minutes.

Red card
Croatia's dominance was total and a sixth goal duly arrived on 64 minutes, when substitute Rakitic poked in the rebound after Koldo had parried Petrić's curling free-kick. Rakitic, Kranjčar and substitute Boško Balaban all came close late on, but despite the sending-off of García for a late tackle on Rakitic, there would be no repeat of last October's scoreline.