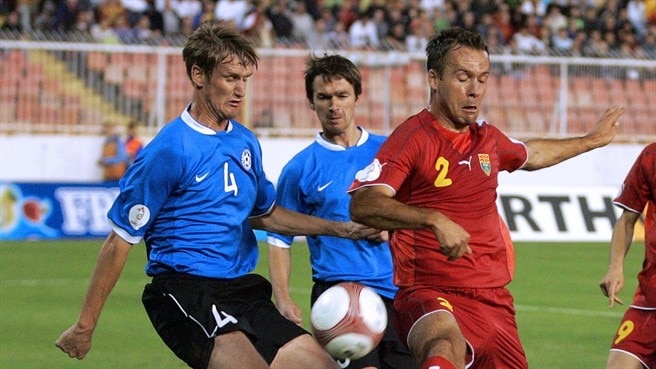 F.Y.R. Macedonia failed to complete the double over Group E rivals Estonia despite dominating for large periods as they pushed in vain for a winning goal in Skopje.

Early onslaught
Despite struggling against an early Estonia onslaught, which earned the visitors a 17th-minute lead through Raio Piiroja's strike, the Macedonians equalised on the half-hour when Goran Maznov headed in a corner. The subsequent rash of chances that they forced could not produce a winner.

Estonia on top
Estonia had the better of the first half and capitalised when Piiroja drove a right-footed shot past goalkeeper Petar Milosevski to give his team a deserved advantage. The hosts responded, though, and Maznov restored parity when he met Darko Tasevski's inswinging corner with a towering header. Estonia then came close to regaining the initiative late in the half, Piiroja volleying a Joel Lindpere corner just wide.

Turnaround
After the break Srečko Katanec's men began to assert themselves and Maznov screwed a shot off target from inside the penalty box. Maznov again threatened after Aleksandr Dmitrijev had fouled substitute Artim Polozani on the left wing; the midfielder dusted himself down to cross the resulting free-kick for the impressive Maznov to nod centimetres wide.

Macedonian miss
Another F.Y.R. Macedonia forward, Aco Stojkov, also squandered a late opportunity when he failed to trouble Pavel Londak from close range. The draw leaves the home side in fifth place in Group E on eight points, while their opponents trail four points behind having played a game more. The Macedonians had won 1-0 in Estonia in August 2006.