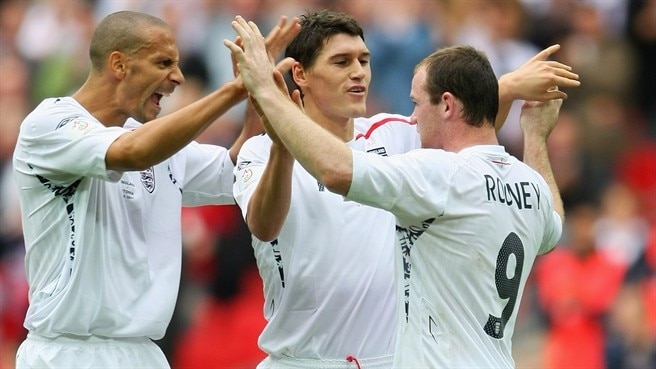 England 3-0 Estonia The home team geared up for Wednesday's decisive match against Russia with a fifth successive 3-0 win.
Read more

Cole concern
Shaun Wright-Phillips broke the deadlock after just eleven minutes and it set the tone as Estonia struggled to deal with England's crisp passing. By half-time they were 3-0 down following two strikes in as many minutes – a goal from Wayne Rooney and a Taavi Rähn own goal. This allowed Steve McClaren's men to ease off ahead of Wednesday's pivotal meeting with Russia in Moscow though they may go into that game without Ashley Cole who was carried off with a serious-looking ankle injury.

Rooney relief
It was a disappointing footnote to a match that had begun brightly when Wright-Phillips linked up with Gareth Barry and Micah Richards before drilling an acute effort between Mart Poom's legs; it was the platform for an impressive first half from England. On 32 minutes the advantage was doubled when Joe Cole crossed to Rooney and the Manchester United FC man grabbed his first international goal in eleven months, firing in as Poom was wrong-footed by a deflection off Raio Piiroja.

Lescott debut
The goalkeeper was left stranded again a minute later when Ashley Cole sent in a deep cross that was met 18 metres out by the lunging head of the back-tracking Rähn, who watched in horror as his connection nestled inside the near post. Three goals up at half-time, McClaren was afforded the luxury of taking off Rio Ferdinand for debutant Joleon Lescott, with the former being one of four England players a yellow card away from suspension. Another, Ashley Cole, soon joined him on the sidelines but in less pleasant circumstances and even as England cruised through the second half, his fitness will have been preying on McClaren's mind.