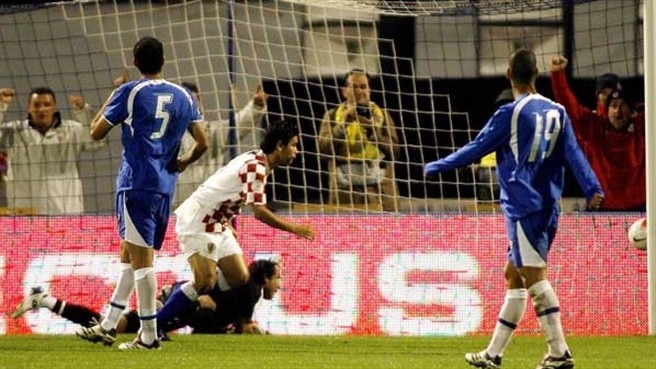 Eduardo da Silva's second-half goal for Croatia secured a victory that leaves them on the brink of qualification for UEFA EURO 2008™.

One win away
Top of Group E at kick-off, the win against Israel moves Croatia eight points clear of third-placed Russia, who have only three games left starting with the Wednesday visit of England. Even if Russia prevail there, victories in F.Y.R. Macedonia or England next month would ensure Croatia's berth in the finals. Israel's hopes, strong so for long, are over.

Olić denied
Before a 35,000-strong crowd at the Maksimir Stadium, Croatia dominated from the start but Israel's defence was holding firm. The home side's best chance in the first half came when Jerko Leko's 15th-minute header fell to the feet of Ivica Olić, whose shot produced a point-blank save from Nir Davidovich.

Eduardo strikes
Croatia's territorial supremacy paid off seven minutes into the second half. Vedran Ćorluka's cross from the right fell perfectly for Eduardo to strike the ball past the Israel goalkeeper. Now Israel were forced to attack and Yossi Benayoun's shot from distance was denied by Stipe Pletikosa. Yet Croatia's points were safe and Davidovich did well to prevent Darijo Srna's free-kick doubling the lead. Slaven Bilić's men can now relax on Wednesday and hope that England make their November fixtures a formality.