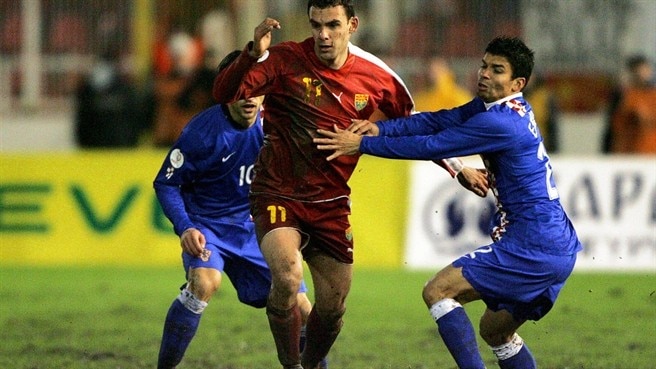 F.Y.R. Macedonia 2-0 Croatia The visitors lost their unbeaten record in Group E yet qualified for the EURO courtesy of events elsewhere.
Read more

Favourable scoreline
Although second-half goals from Goran Maznov and Ilco Naumoski won the day in Skopje, Croatia had qualified for next summer's tournament before kick-off because rivals Russia were beaten in Israel. Slaven Bilić's team will progress to Austria and Switzerland as group winners provided they avoid a two-goal defeat in England on Wednesday.

Home pressure
Given Croatia's pre-match success, it was perhaps no surprise that F.Y.R. Macedonia should make the running on the pitch. Naumoski had the best two chances of the first half – first when a Maznov cross just eluded his attempted header, then when Croatia keeper Stipe Pletikosa spilled the resulting loose ball at his feet and he could not apply the finishing touch.

To the rescue
Eduardo da Silva led the charge for Croatia early in the second half, his shot being blocked by defender Igor Mitreski, before the home side almost scored on the counterattack. When a cross was headed back across goal by Naumoski, only the intervention of Dario Šimić prevented the breakthrough. At the other end, Niko Kovač nodded wide from a Darijo Srna corner.

Late goals
Then the deadlock was broken on 71 minutes. Maznov played a one-two with Naumoski before lashing the ball low past Pletikosa as he entered the area. Victory was secured for Srečko Katanec's men when, with 12 minutes remaining, Naumoski broke clear to stroke the ball beyond the keeper. Success on the day for the hosts, then, yet an even sweeter taste in defeat for Croatia.