Croatia leave England down and out 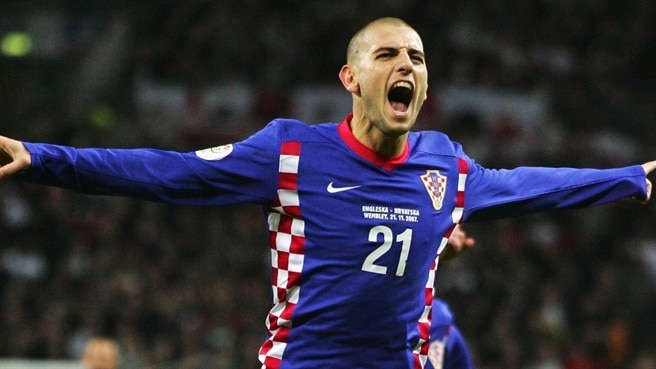 Croatia leave England down and out

A late long-range goal from substitute Mladen Petrić sent Croatia to UEFA EURO 2008™ as Group E winners and ended the hopes of England, who had battled back from two goals down in a gripping encounter.

Rousing contest
Needing only a draw to progress, England made the worst possible start as Niko Kranjčar and Ivica Olić found the net in the first quarter-hour to put Croatia in command. The home side rallied in the second period, however, Frank Lampard halving the deficit from the penalty spot in the 56th minute before Peter Crouch volleyed the equaliser nine minutes later. Just as it looked as if England would earn the point they needed, though, Petrić drilled in with 13 minutes left to finally kill off their challenge.

Croatia in control
Scott Carson replaced Paul Robinson in goal for England but that decision backfired within eight minutes as Kranjčar cut inside from the left and unleashed a dipping shot that squirmed through the goalkeeper and into the net. Although Shaun Wright-Phillips drew a save from Stipe Pletikosa almost immediately, the visitors doubled their advantage with a clinical counterattack in the 14th minute, Eduardo da Silva slipping Olić through to round Carson and roll in.

England rally
England manager Steve McClaren brought on a second forward in Jermain Defoe and David Beckham – for his 99th cap – at half-time and though Eduardo was denied by Carson's legs, the changes revived England. Lampard sent Pletikosa the wrong way from the spot eleven minutes after the restart following Josip Šimunić's tug on Defoe and while Carson had to make two fine saves from Olić, the home side then equalised five minutes past the hour. Crouch collected Beckham's right-wing cross on his chest and volleyed into the corner of the net.

Petrić stunner
Croatia, however, refused to settle for a point and continued to press forward looking for a third goal. They got their reward in the 77th minute as two substitutes combined to devastating effect. Danijel Pranjić slipped a pass inside for Petrić to drill a 25-metre shot across Carson and restore their lead and, despite pressing forward in the final ten minutes, England's efforts were all in vain.