Russia make most of their lifeline 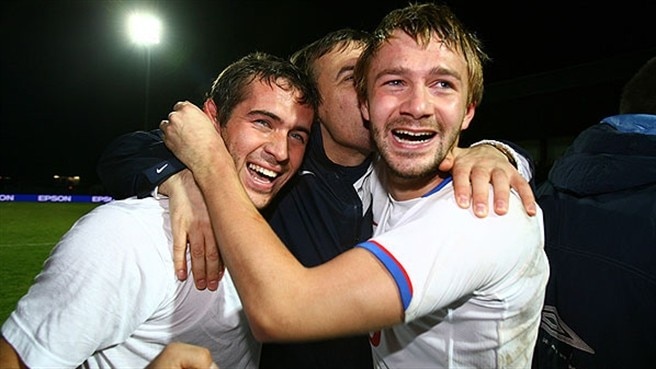 Russia make most of their lifeline

Russia took advantage of England's defeat by Croatia by beating Andorra to secure an unexpected place at UEFA EURO 2008™ as Group E runners-up.

Sychev winner
Russia's chance seemed to have gone when they lost in Israel on Saturday, but Croatia's Wembley victory opened the door and Guus Hiddink's side forced their way through by the narrowest margin. Dmitri Sychev scored the all-important goal on 39 minutes to secure the points for a Russia team who also missed a penalty and finished the game with ten men following Andrei Arshavin's late dismissal.

Wembley cheer
The visitors had begun slowly and the opening exchanges were evenly balanced. News then spread around the ground that Croatia had gone ahead in London. There was an even bigger cheer soon afterwards when Russia fans realised England were two down. Those supporters urged on their side but Andorra goalkeeper Koldo Álvarez kept them at bay. The No1 saved well from Aleksandr Kerzhakov before keeping out Denis Kolodin's low free-kick.

Sychev decider
Russia finally made the breakthrough six minutes before half-time. The inspiration came from the bench as substitute Dmitri Torbinskiy set up the goal with his first touch. The winger found space on the right and delivered a precise cross for Sychev who headed over the advancing Álvarez and into an empty net.

Penalty save
Russia spurned the invitation to double their advantage just before the interval after Álvarez brought down Kerzhakov in the area. The Andorra custodian injured himself in the process but got up to make an excellent stop from Kolodin's spot-kick. Álvarez could not continue after the break but his replacement José Antonio Gómes was kept busy by the Russia attack.

Arshavin off
Torbinskiy was a constant threat and forced Gómes into two good saves before Kerzhakov had an effort blocked. Hiddink's men lost some of their momentum when news came through that England had levelled at 2-2 with Croatia, but cheers soon rang around the ground again as the Russia fans learned of Croatia's third goal. Arshavin was sent off on 84 minutes for violent conduct yet Russia would soon be celebrating.