Toni gets Azzurri back on track 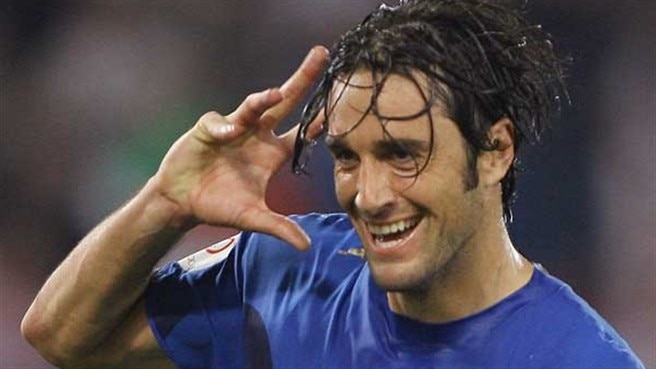 Toni gets Azzurri back on track

Second-half goals from Massimo Oddo and Luca Toni breathed new life into Italy's faltering UEFA EURO 2008™ qualifying campaign as the world champions won 2-0 against Ukraine in Rome to leapfrog their opponents into third place in Group B.

Penalty lifeline
Having picked up just a point from their opening fixtures against France and Lithuania, it did not look good for Roberto Donadoni's team as they went into the final 20 minutes at the Stadio Olimpico with the game still goalless. But they were handed a lifeline when Andriy Rusol brought down Toni on 71 minutes. Oddo stepped up and converted from the spot and Toni then calmed frayed nerves, volleying in Antonio Di Natale's left-wing cross to secure Donadoni's first victory in charge.

Tymoschuk tester
This success did not come without its nervy moments as Ukraine made light of the illness that ruled out Andriy Shevchenko, and twice went close to breaking the deadlock early on. More familiar in his role as the side's midfield mastiff, Anatoliy Tymoschuk demonstrated another string to his bow when he stung Gianluigi Buffon's fingers with a blistering long-range effort, while Oleh Gusev fired straight at the Juventus custodian when well positioned.

Morale boost
Italy had come out on top the last time these teams met in the FIFA World Cup quarter-finals, when Toni scored twice in a 3-0 victory, and as the Azzurri settled the ACF Fiorentina man could easily have struck again on the half-hour but headed straight at Olexandr Shovkovskiy. Gennaro Gattuso and Vincenzo Iaquinta also tested the Ukraine keeper whose resistance was finally ended by Oddo with 19 minutes remaining. Toni doubled the advantage eight minutes later to boost Italian morale ahead of Wednesday's match in Georgia.