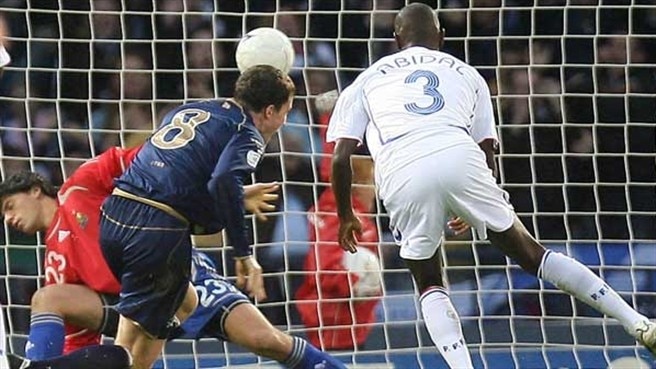 Scotland 1-0 France
Scotland's renaissance was confirmed as they stunned Les Bleus thanks to Gary Caldwell's goal in Glasgow.
Read more

Scotland's renaissance under Walter Smith was confirmed as the men in dark blue stunned France with a 1-0 win at Hampden Park. Defender Gary Caldwell scored the only goal midway through the second half to inflict on Les Bleus their first qualifying defeat since 5 June 1999 - a 3-2 loss to Russia on the road to UEFA EURO 2000™.

Outright lead
Caldwell made his Scotland debut in a 5-0 reverse in Paris the last time these sides met in former coach Berti Vogts's first match. Under Smith, however, Scotland have regained their belief and their victory over the FIFA World Cup runners-up gives them the outright lead in UEFA EURO 2000™ qualifying Group B with a maximum nine points.

McFadden role
A Scotland success looked unlikely in the first half. Lone striker James McFadden, on his first appearance for either club or country in a month, created an early opening for himself when he dispossessed Lilian Thuram but shot against the legs of team-mate Paul Hartley. Thereafter, though, it was one-way traffic towards the home goal.

Henry hits post
After nine minutes Thierry Henry dusted himself down after a foul by Caldwell and curled a free-kick past Craig Gordon and against the far post. Further set-piece opportunities followed for the visitors as the deep-lying Scotland defence creaked under the strain and, in the 17th minute, from a Franck Ribéry free-kick, captain Patrick Vieira headed in but was denied by an offside flag.

Scotland struggling
Four minutes later David Trezeguet beat Gordon with an overhead strike but he too was ruled offside. With Scotland struggling to keep possession, France kept coming and Florent Malouda flashed a half-volley just over and then had Gordon sprawling across his goal to save his low drive.

Hampden explodes
Having survived to the break, there was encouragement for the Scots at the start of the second period with an opportunity for McFadden who, in the chase to meet Darren Fletcher's long ball, got ahead of Jean-Alain Boumsong but sliced his shot wide. The hosts were now seeing more of the ball and Hampden exploded in the 67th minute as Caldwell met Hartley's corner and steered a low shot past Grégory Coupet.

Henry miss
France had chances to draw level notably when Henry sent a free header straight at Gordon in the closing minutes but Scotland held out for a famous victory. Smith's men will take their unbeaten record to Ukraine on Wednesday, when France must aim to get back on track at home to the Faroe Islands.