Published: Thursday 29 March 2007, 0.58CET
Italy 2-0 Scotland The world champions moved to within two points of the Group B summit thanks to Luca Toni's two goals. 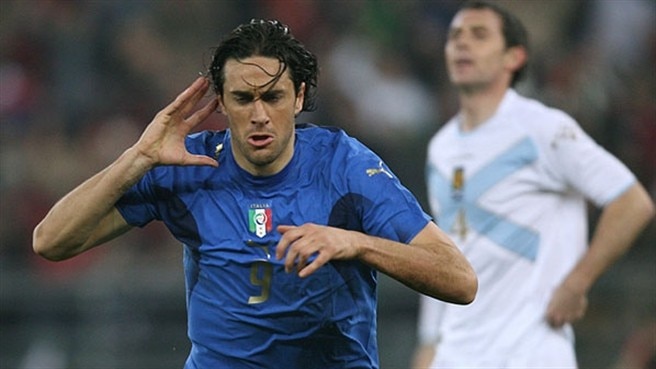 Italy 2-0 Scotland The world champions moved to within two points of the Group B summit thanks to Luca Toni's two goals.
Read more

World champions Italy moved within two points of the Group B summit as Luca Toni's two goals earned them a deserved 2-0 win over Scotland in Bari.

Back on track
After taking just one point from their first two UEFA EURO 2008™ qualifiers, Roberto Donadoni's team have got back on track with three successive victories – this latest one against a Scotland side who started the day top of the section and ended it still level on 12 points with Ukraine and France.

Breakthrough
Italy had won all five previous home meetings with Scotland, and it took them only 12 minutes to make the breakthrough as Massimo Oddo sent a free-kick into the box and Toni got in front of Lee McCulloch and headed into the left-hand corner of the net. It was not as though Scotland had not been warned, Toni having sent a header sailing wide in the fifth minute.

Miller miss
Though Scotland began poorly, they recovered well after falling behind albeit without creating any clear-cut chances. Lee McCulloch fired a half-volley straight at Buffon and on the stroke of half-time, lone striker Kenny Miller narrowly failed to make a clean connection with a far-post header from Gary Naysmith's cross.

Di Natale denied
If Scotland went into the interval with cause for optimism, they were up against it once the action resumed. In the 49th minute Mauro Camoranesi sent Antonio Di Natale clean through down the inside-left channel but Craig Gordon made a fine one-handed save. Two minutes later Di Natale raced through again and the impressive Gordon denied him once more, this time sticking out his left foot to turn the ball away.

Blue wave
A blue wave kept rolling towards the Scotland goal, Toni nodding past the far post then driving a shot straight at Gordon. Finally, on 70 minutes, the ACF Fiorentina forward struck again, getting on the end of Camoranesi's right-wing cross with a header down and into the back of the net for his 12th international goal. Toni's double means Italy can look ahead to their June visits to Faroe Islands and Lithuania with renewed optimism, while the Faroes is also the next stop for Scotland, on 6 June.