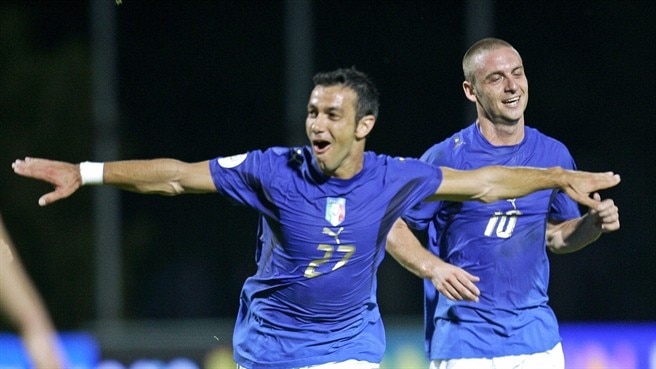 Two first-half goals from Fabio Quagliarella gave Italy a comfortable win in Lithuania as they remained second in UEFA EURO 2008™ qualifying Group B.

Selection justified
Italy coach Roberto Donadoni made five changes from the team that narrowly beat the Faroe Islands on Saturday, with Quagliarella among those brought in, and the UC Sampdoria forward repaid that confidence with strikes on 31 and 45 minutes. With this victory, the world champions go into the summer two points behind France and one ahead of Scotland.

Early chances
The Azzurri started in confident fashion and could have taken the lead early on when Filippo Inzaghi was just unable to get on to Andrea Pirlo's cross. Shortly after, Simone Perrotta tried his luck from long range but his effort went high over the bar. Midway through the first half, Antonio Di Natale failed to find the finishing touch to Pirlo's clever pass. Lithuania almost scored themselves when Mantas Savenas's strike from outside the area took a deflection and flew centimetres wide of Gianluigi Buffon's far post. Yet Italy finally scored as Quagliarella worked his way past Igoris Morinas before driving a left-foot shot from the edge of the box beyond the reach of keeper Paulius Grybauskas.

Second strike
Although Buffon did well to keep out both Mindaugas Kalonas's close-range effort and Marius Stankevicius's bullet free-kick, it was the visitors who found the net again before the break. Quagliarella controlled the ball inside the area before sending in a low strike. It proved a hammer blow for Lithuania. Italy went on to control the second half with Di Natale going close to a third on 58 minutes, although they did survive a late scare when Tomas Danilevicius's set-piece flashed over. Italy welcome France for a FIFA World Cup final rematch on 8 September when fifth-placed Lithuania are in Scotland.