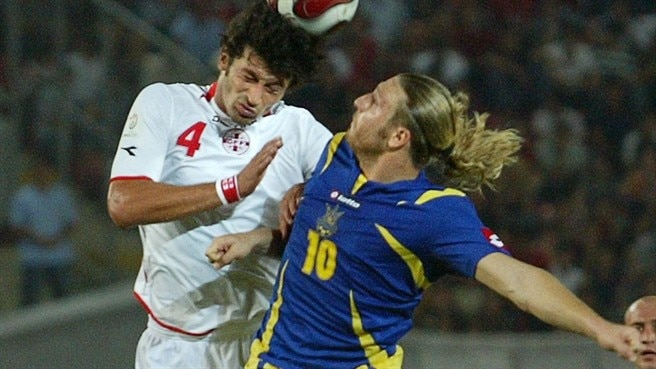 Five points adrift
The visitors to Tbilisi led early through Oleh Shelayev and were only denied more goals by Georgia keeper Georgi Lomaia before substitute David Siradze headed the home side level a minute from the end. With Scotland beating Lithuania 3-1, fourth-placed Ukraine are now five points adrift of second in Group B though they have a game in hand.

Early goal
Ukraine started brightly and had the first shot of the match in the fourth minute through Volodymyr Yezerskiy, Lomaia proving equal to the effort. Oleh Blokhin's team did not have to wait long to break the deadlock, though, as Shelayev connected with Ruslan Rotan's outswinging corner to the far post and shot in. Rotan nearly added a second immediately afterwards but curled the ball wide.

Shevchenko denied
Andriy Shevchenko, captaining Ukraine despite recent injury problems, forced a save from Lomaia while visiting keeper Olexandr Shovkovskiy was tested by Mate Ghvinianidze before Georgi Demetradze drove over from a free-kick. Andriy Rusol was the next to be denied by Lomaia although Georgia came close to an equaliser just before the break when Lasha Jakobia sliced over.

Equaliser
Shevchenko was determined to put the result beyond doubt in the second half, yet Lomaia was equal to a strong ten-metre shot and then a curling effort from outside the area which he dived to tip wide. Serhiy Nazarenko also threatened but Ukraine's lead disappeared when Demetradze's inswinging corner was headed high into the net by Siradze. Ukraine qualified for the 2006 FIFA World Cup despite conceding a late equaliser in Georgia but they welcome Italy on Wednesday knowing victory could be crucial for their hopes this time. Georgia's next group game is away to the world champions on 13 October.