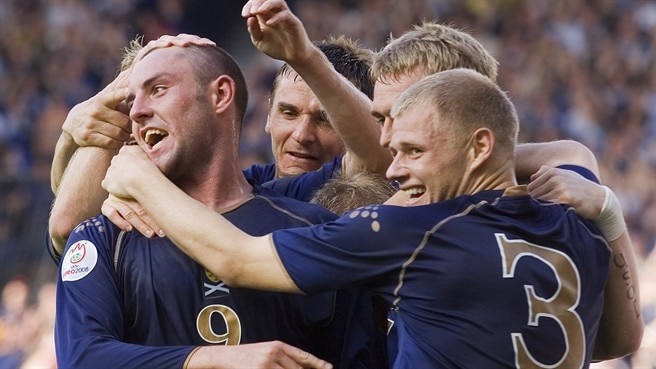 Stephen McManus and James McFadden struck in the last 15 minutes to give Scotland a priceless UEFA EURO 2008™ qualifying Group B win against Lithuania.

In contention
Kris Boyd had put Scotland ahead in the first half but Tomas Danilevičius equalised from the penalty spot. However, McManus and McFadden delighted the home fans with late goals to keep Scotland in a strong position ahead of Wednesday's trip to France.

Reaction saves
The first chance had gone to Lithuania's Mindaugas Kalonas on 18 minutes but his shot went wide and Scotland soon took control. It seemed that the hosts would score in the 23rd minute but Žydrunas Karčemarskas produced superb reaction saves from consecutive headers by Boyd and Lee McCulloch.

Scotland ahead
Boyd made amends just past the half-hour. Darren Fletcher delivered a quickly taken free-kick from the right and the Rangers FC striker escaped his marker and dived to head the ball inside the far post. Karčemarskas made two further stops from Boyd late in the half.

Penalty equaliser
It was a fairly quiet start to the second period but soon after the hour, the scores were level. Saulius Mikoliunas broke into the Scotland box and went down after a challenge from Fletcher; Danilevičius struck the penalty straight into the middle of goal as Craig Gordon guessed left.

Winner
Scotland were determined to restore their lead and Karčemarskas was called into action to deny Stephen McManus's header from Fletcher's free-kick. But with 13 minutes left Shaun Maloney, who had just come on, crossed to the far post after Fletcher's short corner to the edge of the area. McManus's knee connected with the ball, enough to send it emphatically past Karčemarskas. Substitute McFadden secured the victory soon after with a flying long-range finish after being teed up by Boyd.