Published: Sunday 9 September 2007, 0.55CET
Italy 0-0 France Les Bleus maintained the edge in Group B after a Milan encounter in which the defences were on top. 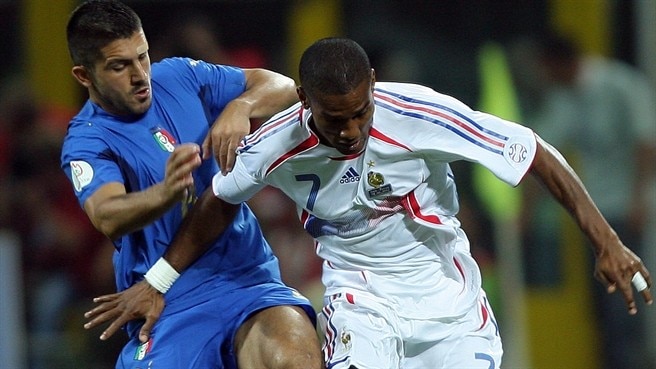 Italy 0-0 France Les Bleus maintained the edge in Group B after a Milan encounter in which the defences were on top.
Read more

France maintain the edge in UEFA EURO 2008™ qualifying Group B after coming away from Italy with a goalless draw.

France top
Les Bleus had gained revenge for their 2006 FIFA World Cup final defeat with a 3-1 home win against the Azzurri last September, but in a tight game in Milan neither side emerged triumphant tonight. France are now one point clear of their visitors on Wednesday, Scotland, who have moved ahead of Italy by the same margin following their victory against Lithuania. Ukraine, where Italy play in midweek, are four further points behind.

No quarter given
These two evenly matched teams gave no quarter anywhere on the pitch, especially in midfield where Patrick Vieira and Gennaro Gattuso played with full commitment. It was not until the half-hour that there was a real chance at either end, as Alessandro Del Piero was denied by a Vieira sliding tackle and then shot at Mickaël Landreau after a one-two with Mauro Camoranesi.

Buffon saves
Del Piero soon turned provider for Filippo Inzaghi whose attempt from the byline brushed the top of the crossbar, while the flair of Franck Ribéry gave France an opening late in the first half as he jinked past Gianluca Zambrotta but was unable to produce a finish. Florent Malouda then tested Gianluigi Buffon with a powerful drive from 20 metres, yet the Italy goalkeeper made an equally fine stop.

Reflex stop
The second period began brightly with Camoranesi driving at Landreau from distance and Nicolas Anelka prompting an excellent reflex save from Buffon. Neither keeper looked like being beaten, though, and even when Buffon did fail to reach a long ball forward which Anelka headed goalwards, Fabio Cannavaro was in behind him providing cover.