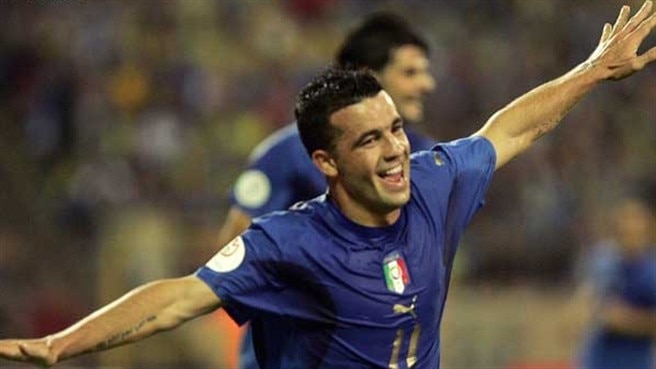 Antonio Di Natale was the two-goal hero for Italy as the Azzurri claimed three vital points from their Group B qualifier in Ukraine.

Ukraine aggrieved
Roberto Donadoni's side were on the back foot for much of the encounter but Di Natale's double moved Italy above France and into second place in the table. Andriy Shevchenko was arguably the game's outstanding player, leading the home team forward and scoring an equaliser midway through the second half, but that was not enough to earn the point Ukraine felt they merited.

Headed opener
Shevchenko set the tone early on, firing a 25-metre free-kick against the crossbar with Gianluigi Buffon beaten. The striker continued to pose a threat, forcing Buffon into action from even further out as Ukraine went close to an opening goal, yet in typical fashion Italy took the lead with their first chance four minutes before the break. Andrea Pirlo lifted the ball to Di Natale who nodded in from close range.

Shevchenko menace
The forward had the next chance for Italy too, after Vincenzo Iaquinta led a three-on-one attack, but his header was too weak and Olexandr Shovkovskiy made an easy save. Shevchenko had not wasted all his energy in the first period and he continued to inspire the hosts' bid for an equaliser. He charged down Andrea Barzagli's clearance but could not guide the ball past Buffon with just the goalkeeper to beat.

Counterattack winner
It was only a matter of time before he did eventually break through and after 71 minutes he swivelled to sweep a loose ball past Buffon as the Italy defence failed to clear a corner. But with a rare counterattack, Di Natale struck the decisive blow with 13 minutes remaining. Massimo Ambrosini chipped the ball over the Ukraine rearguard to send Di Natale free and he maintained his composure to place the ball calmly into the net and secure the points.