Published: Sunday 14 October 2007, 0.51CET
Italy 2-0 Georgia The Azzurri moved back into second place in UEFA EURO 2008™ qualifying Group B after a hard-fought victory over Georgia in Genoa. 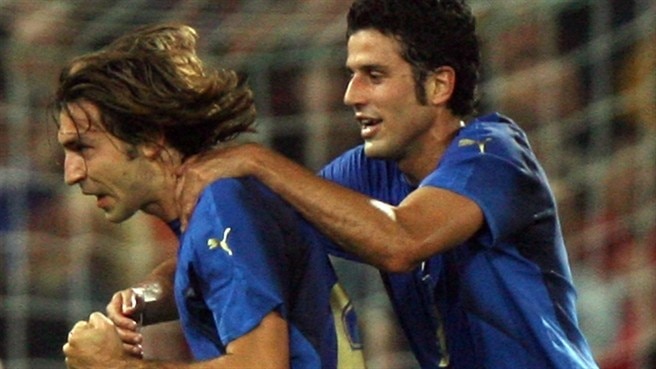 Italy 2-0 Georgia The Azzurri moved back into second place in UEFA EURO 2008™ qualifying Group B after a hard-fought victory over Georgia in Genoa.
Read more

Italy reclaimed second place in UEFA EURO 2008™ qualifying Group B on Saturday after a hard-fought victory over Georgia in Genoa.

Italy rise
The Azzurri had slipped behind France earlier in the day when Les Bleus won 6-0 in the Faroe Islands, but Roberto Donadoni's side edged back into touching distance of surprise leaders Scotland thanks to goals from Andrea Pirlo and Fabio Grosso. The world champions are a point behind Scotland, who defeated Ukraine 3-1, with France a further point adrift. All three teams have two games remaining.

Toni comes close
Although they never threatened Gianluigi Buffon's goal, Georgia did make the hosts work for their triumph. Klaus Toppmöller's men enjoyed the first opportunity on goal as Jaba Kankava's shot was easily held by Buffon, who was captaining Italy for the first time. Italy soon took control though. The in-form Luca Toni, returning to the side after missing the last two qualifiers through injury, was unlucky not to break the deadlock on 30 minutes when his header from Pirlo's free-kick flew just wide.

Pirlo strikes
Italian efforts were rewarded shortly before half-time when AC Milan playmaker Pirlo curled a free-kick beyond Georgia goalkeeper Georgi Lomaia. The home team were happy to sit on their advantage after the restart, yet still should have made it 2-0 on 71 minutes, Lomaia doing well to keep out a Toni attempt after a clever pass from Fabio Quagliarella. Italy picked up the tempo and struck their second of the evening on 84 minutes. Toni's pass found Grosso who beat Lomaia with a left-footed shot.