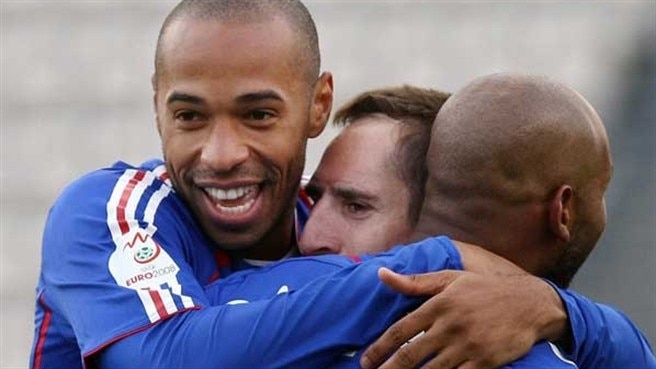 France brushed off a nightmare journey to the Faroe Islands to gain a comfortable victory in which Thierry Henry became Les Bleus' joint all-time leading scorer.

Early goals
Raymond Domenech's team were aiming to bounce back from last month's home defeat by Scotland and Anelka gave them the perfect start when he turned in a Franck Ribéry cross from close range. Not long after, Henry claimed his landmark goal. Ribéry was again the provider, beating the home defence and supplying the FC Barcelona man, who fired in from 12 metres.

Benzema strikes
Benzema replaced Anelka at the break and it took him only five minutes to join his fellow striker on the scoresheet, Ribéry once more the supplier with a free-kick from the left that the substitute met with an accurate header. On 66 minutes Rothen scored direct from a free-kick that curled into the top left-hand corner of Jákup Mikkelsen's goal.

Victory complete
Símun Samuelsen had gone close with the home side's best chance of the contest, and Christian Lamhauge Holst's 73rd-minute header also just missed the target, but the next goal came from 19-year-old Benzema, turning in a pass from Henry. Ben Arfa added further gloss to the scoreline in added time. France welcome Lithuania on Wednesday while the Faroe Islands will attempt to get off the mark in Ukraine.