Ukraine come a cropper in Kaunas

Published: Sunday 18 November 2007, 0.04CET
Lithuania 2-0 Ukraine
Mantas Savenas scored one and set up another as the home side moved to within three points of their Group B rivals. 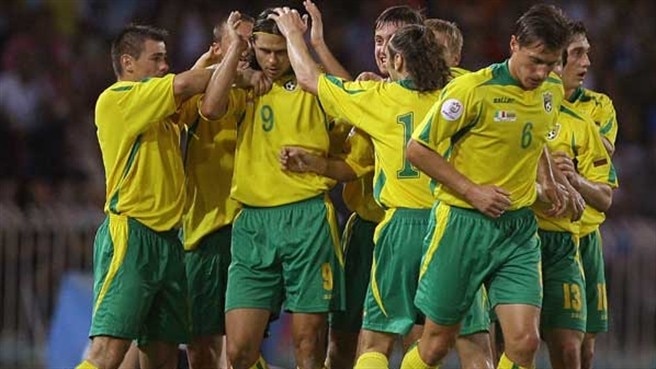 Ukraine come a cropper in Kaunas

Lithuania 2-0 Ukraine
Mantas Savenas scored one and set up another as the home side moved to within three points of their Group B rivals.
Read more

Mantas Savenas scored one and created another as Lithuania defeated Ukraine 2-0 to give themselves hope of finishing above the FIFA World Cup quarter-finalists in Group B.

Stunning second
The striker lit up a poor first half with a poacher's finish four minutes before the break and then paved the way for Tomas Danilevicius to double the lead in stunning style. Ukraine had sporadic opportunities to make a mark on the game, but their finishing was sloppy. The victory keeps Lithuania in fifth spot, three points behind Ukraine – who next entertain France – ahead of their concluding match in Georgia.

Highlight
The tone for what was to come was set with only two minutes gone when Ukraine's Volodymyr Yezerskiy, lurking on the edge of the area, scuffed his shot into a crowd of Lithuania defenders. Half-chances came and went for both sides, yet it was not until Savenas had forced Olexandr Shovkovskiy to tip a free-kick around the post in the 18th minute that the game had a highlight.

Numerous chances
The opening goal would go to Lithuania and Savenas. Igoris Morinas supplied the decisive cross, though in reality it was a poor clearance which allowed Savenas to fire the ball into the middle of the net from nine metres. Ukraine had numerous opportunities to hit back before Danilevicius scored a brilliant second by chipping the ball over the head of Andriy Pyatov, deputising in goal after Shovkovskiy had picked up a knock.