Published: Wednesday 21 November 2007, 23.58CET
Italy 3-1 Faroe Islands Italy completed their qualifying campaign by securing top spot in Group B with a comfortable victory over the bottom side. 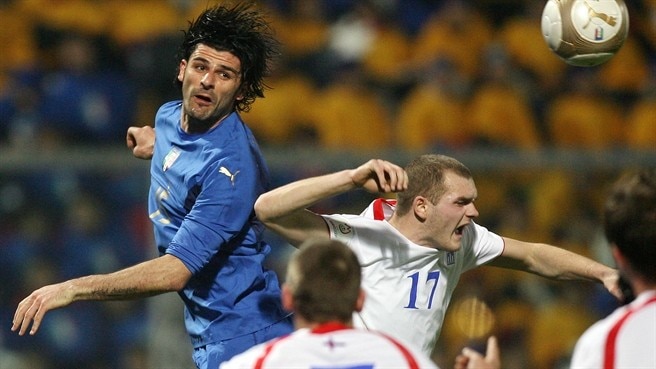 Italy 3-1 Faroe Islands Italy completed their qualifying campaign by securing top spot in Group B with a comfortable victory over the bottom side.
Read more

Italy completed their UEFA EURO 2008™ qualifying campaign by securing top spot in Group B with a 3-1 triumph over the Faroe Islands in Modena.

Faroes point-less
Defender Fródi Benjaminsen's own goal put the world champions in front after eleven minutes, Luca Toni doubled the lead on 36 minutes and Giorgio Chiellini's stunning strike four minutes before the break gave the Azzurri a commanding advantage. Rógvi Jacobsen's header reduced the deficit seven minutes from the end but the visitors ended the qualifying tournament without a single point.

Reshuffled side
Having already earned qualification for next summer's finals, Italy coach Roberto Donadoni made eight changes from Saturday's 2-1 triumph in Scotland but his reshuffled side did not take long to break the deadlock. Toni had already directed a close-range header just wide when Benjaminsen deflected Massimo Oddo's cross into his own net. Italy continued to press forward and shortly after the half-hour they increased their advantage, Toni getting on to the end of Fabio Grosso's cross before firing past Jákup Mikkelsen.

Reward
The home side continued to control possession and their efforts were rewarded again when Chiellini's 25-metre drive stunned Mikkelsen. At the other end, the Faroes threatened with Súni Olsen's shot from distance falling just wide of Marco Amelia's far post. Into the second half and Mikkelsen had to dive at full stretch to stop Toni's right-footed effort while Hanus Thorleifson made a goalline clearance from Italy substitute Fabio Quagliarella's powerful header.

Job done
Jógvan Martin Olsen's team did not just defend, though, and on 83 minutes, they found the net when Jacobsen's powerful header towards the near post beat Amelia. Italy might have conceded a second had Amelia not saved Jóhan Davidsen's header but by then, the job was done.