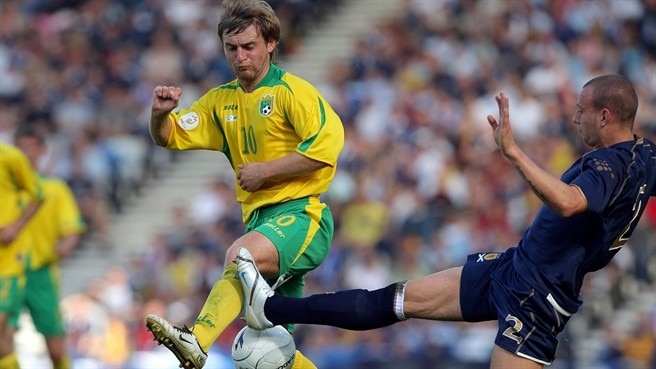 Lithuania rode their luck to beat Georgia in Tbilisi courtesy of second-half goals by Audrius Ksanavicius and Mindaugas Kalonas.

Second-half strikes
Ksanavicius put the visitors in front against the run of play on 52 minutes, before substitute Kalonas added a second deep into stoppage time to secure Lithuania's fifth victory of the UEFA EURO 2008™ campaign.

Home pressure
The hosts had begun positively, with David Kvirkvelia's 30-metre shot being well saved by Žydrunas Karčemarskas. From the resulting corner, Karčemarskas was called into action again to deny a David Siradze header, while Levan Kenia also threatened for Georgia with a close-range header that was blocked by Marius Stankevicius.

Key saves
Edgaras Jankauskas had Lithuania's first attempt on 26 minutes, a wayward drive from distance, while at the other end Georgia hit the post when Zurab Menteshashvili's inswinging free-kick narrowly evaded team-mates Kakha Kaladze and Lasha Salukvadze. Then Kenia played in Siradze whose effort from the left of the area was stopped by the legs of Karčemarskas. The Lithuania keeper would also thwart Kenia before the half-time whistle blew.

Points won
So Georgia had received little warning of danger when Ksanavicius beat Giorgi Makaridze with a low strike as he approached the home team's area. Stankevicius might have doubled the advantage in the 73rd minute as he volleyed Kalonas's corner over the bar, although Levan Mchedlidze went even closer for Georgia with an overhead kick. The next, deciding goal, however, went to Lithuania as Kalonas finished off good work down the right from Andrius Velička. The result left Lithuania on 16 points in Group B, six above the Georgians.