Published: Thursday 22 November 2007, 0.30CET
Ukraine 2-2 France
Andriy Shevchenko earned Ukraine a point against a France team who had already done enough to qualify from Group B. 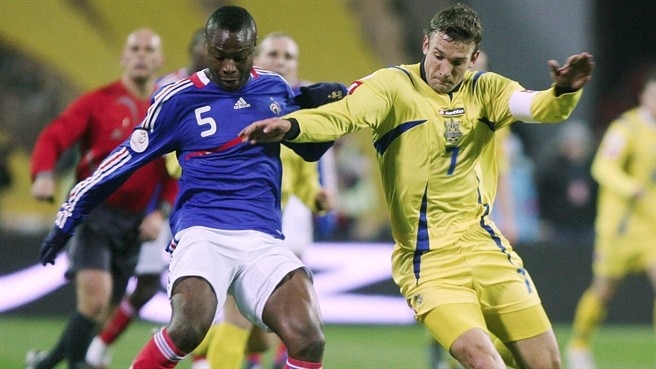 Ukraine 2-2 France
Andriy Shevchenko earned Ukraine a point against a France team who had already done enough to qualify from Group B.
Read more

Andriy Shevchenko's second-half header earned Ukraine a point from their UEFA EURO 2008™ Group B dead rubber against France in Kiev.

Frey error
The hosts had gone ahead early on through Andriy Voronin, but well-taken goals by Thierry Henry and Sidney Govou put France, who had already qualified for next summer's finals, in front. France goalkeeper Sébastien Frey then failed to deal with Shevchenko's looping header in the opening moments of the second half so the spoils were shared on a freezing night in the Ukrainian capital.

Voronin strikes
France started well, dominating possession with Lassana Diarra and Claude Makelele bossing the centre of midfield. It was against the run of play that Ukraine, out of the running for qualification, broke the deadlock in the 14th minute. A cross from the right reached Oleh Gusev who laid the ball back for Voronin to score from 20 metres.

France danger
Les Bleus deservedly equalised six minutes later. Henry controlled Makelele's pass before finding space and curling a fine left-footed shot around goalkeeper Andriy Pyatov. Shevchenko had a stinging drive saved by Frey, although France still looked dangerous and they took the lead on 34 minutes. Govou spun his marker and played a one-two with Karim Benzema before bending an effort from the left into the corner.

Runners-up
Ukraine were gifted an equaliser by Frey at the beginning of the second period. Shevchenko's header from a deep left-wing cross looked harmless, but the goalkeeper failed to catch the ball one-handed and tipped it into his own net. Both teams had chances before the end, but France had already done enough to claim the runners-up spot behind Italy in Group B.