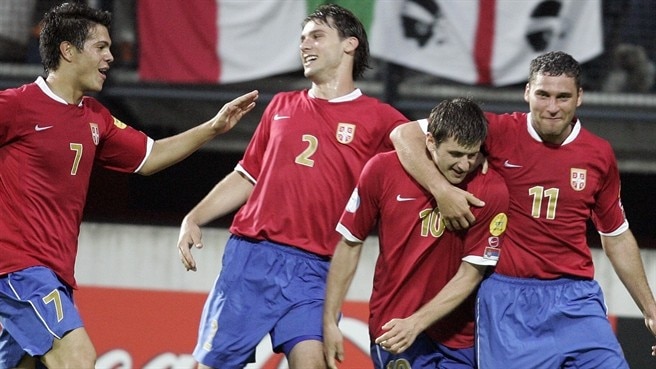 Missed chances
In what is widely considered the oldest city in the Netherlands, the new generation of continental superstars showed how one of football's strongest traditions - the failure to take chances proving costly - still holds true in the modern game. Italy spurned three excellent first-half opportunities and were made to pay 18 minutes into the second half when Milovanović, one of four Serbia players on show who were involved in the 2004 final defeat by Italy, drilled in the only goal from distance. Serbia next play the Czech Republic, who drew 0-0 with Italy's next opponents England earlier in the day, on Thursday.

Counterattack danger
Serbia coach Miroslav Djukić had said he expected Italy to allow his side to control the pace of the match while looking to threaten on the counterattack, and so it proved as the Serbs - the top scorers in qualifying among the eight finalists with ten goals in four games - pressed forward from the outset. They struggled to unpick a typically well-drilled Italy defence, however, and it was the Azzurrini who menaced first, Raffaele Palladino and Alberto Aquilani fashioning a chance for Giampaolo Pazzini on the edge of the area. The ACF Fiorentina striker had hit a hat-trick in Italy's last U21 outing, against England in March, but this time his shot slipped past the post.

Kahriman saves
Italy then lost goalkeeper Gianluca Curci, who limped off with a groin strain, but his replacement Emiliano Viviano had little to do as Pierluigi Casiraghi's team began to take command. Serbia keeper Damir Kahriman got down smartly to gather Riccardo Montolivo's low effort and touched Palladino's attempt wide after the midfielder had latched on to Giorgio Chiellini's through-ball, although the Azzurrini should have been ahead before then. Alessandro Rosina, becoming the first Italian to take part in three U21 finals, sprang Serbia's offside trap with a lofted pass that found Palladino in the clear, but again the forward could only steer a shot wide.

Milovanović winner
Serbia started the second period on the front foot and Milan Smiljanić's curling drive forced Viviano into gainful employment for the first time. Substitute Zoran Tošić then flashed a shot over yet Italy failed to heed the warning and fell behind three minutes past the hour. Two of the veterans of 2004 were involved, Boško Janković's attempted flick falling perfectly for Milovanović to thump an unstoppable 25-metre effort low into the corner of the net. The Italy keeper then kept out the goalscorer's free-kick, which looked destined to find the other corner, although Pazzini wasted a glorious chance to equalise in added time, heading over Andrea Raggi's cross as one goal proved enough for a jubilant Serbia.