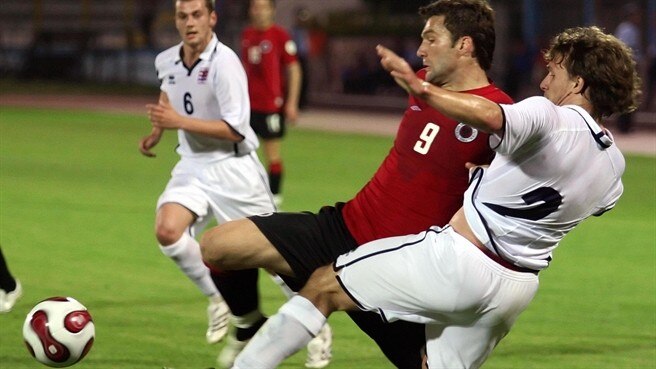 Albania climbed to fifth in Group G as they claimed a 2-0 win against bottom side Luxembourg in Tirana, their first victory in UEFA EURO 2008™ qualifying.

Collette chance
Edmond Kapllani and Altin Haxhi were the goalscorers at the Qemal Stafa Stadium as Otto Barić's team finally claimed their first win having drawn three and lost two of their previous five games. They had not even scored since a consolation in their 2-1 defeat by the Netherlands in October but were soon on the offensive tonight and broke the deadlock seven minutes before half-time when Karlsruher SC forward Kapllani fired in. The visitors had offered little until then, although Daniel Collette should have done better with a chance midway through the half and Albania pressed to extend their advantage.

Beqaj redundant
Haxhi did just that before the hour, stroking the ball past Jonathan Joubert after a terrific attacking run from defender Ervin Skela. At the other end, Albania goalkeeper Arjan Beqaj had little to do though he was forced to scramble across goal as Mario Mutsche threatened soon after. Armend Dallku could have added to the lead but his long-range effort drifted wide though it mattered not as they held on for three points. Barić's team will hope to repeat the feat when the sides meet again on Wednesday, this time in Luxembourg.