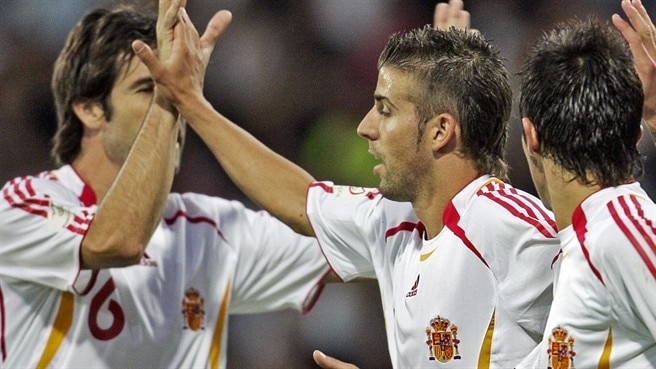 Spain's hopes of qualifying for UEFA EURO 2008™ continued to improve as a goal in each half from David Villa and Xavi Hernández away against Latvia earned them a third successive Group F win.

Welcome win
The away side started the night third in the section but were on top from the outset in Riga, although they did not take the lead until the final minute of the opening period as Villa bundled in. Latvia, who have now lost their last three fixtures in the section, began the second half in positive fashion but their challenge was effectively ended on the hour when Xavi doubled Spain's lead with a shot from outside the penalty area that deflected in off Andrés Iniesta.

Spain on top
The visitors were on the front foot from the first whistle, RCD Espanyol forward Luis García drawing a save from Aleksandrs Kolinko in the opening minute of his international debut, and Luis Aragonés's side pressed forward throughout the opening period. Villa was a lively presence up front with Miguel Ángel Angulo and Iniesta missing the target when well placed, but the breakthrough finally arrived on the stroke of the interval. Unsurprisingly Villa was at the heart of the move, challenging for Angulo's deep right-wing cross with Arturs Zakreševskis as the ball evaded Kolinko to nestle in the corner of the net.

Deflected second
Latvia began the second half transformed, however, and Maris Verpakovskis twice failed to convert presentable opportunities to get the home side back on level terms. First, the striker – who plays his club football in Spain with Getafe CF - narrowly failed to turn in Jurijs Laizans' mis-hit shot before firing wide after galloping clear on to a long Vitalis Astafjevs pass. Those misses proved costly as Spain added a second goal on the hour, substitute Roberto Soldado finding Xavi for a shot that struck Iniesta and looped over the stranded Kolinko.

Soldado impact
Four minutes later Soldado - also making his international debut - drilled in a shot that Kolinko did well to punch clear and the goalkeeper denied the CA Osasuna striker again moments later, palming another effort from distance round his right-hand post. Spain had already done enough to secure the points, however, and will look for another win in Liechtenstein on Wednesday when Latvia play host to Denmark.