Nordstrand on song in Denmark stroll 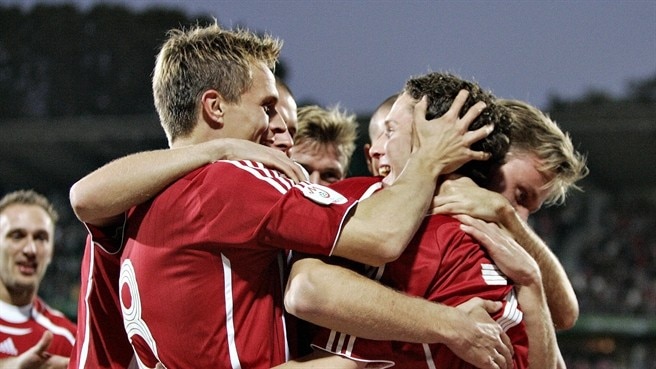 Nordstrand on song in Denmark stroll

Early strike
Martin Laursen and Jon Dahl Tomasson were also on target, all in the first half, as Denmark matched the 4-0 scoreline they had achieved in Vaduz eleven months before. Nordstrand opened the scoring in Aarhus within three minutes with a right-footed shot into the bottom-left corner following a Dennis Rommedahl cross.

Telling crosses
Laursen promptly made it 2-0 to Morten Olsen's side nine minutes later when he slotted home from close range following Niclas Jensen's inswinging corner. Tomasson did not have to wait long to get his name on the scoresheet, being presented with an opportunity from Rommedahl's cross and making no mistake from the left side of the six-metre box.

Tomasson provides
Leon Andreasen hit the bar from 20 metres and Jesper Grønkjær was denied by keeper Peter Jehle before goal No4 arrived, Nordstrand firing a left-footed strike into the bottom corner following Tomasson's pass. Liechtenstein did their best to get back into the game early in the second half, Mario Frick prompting a good parry from Thomas Sørensen, before Denmark's Rommedahl forged two decent opportunities for himself, first driving over from 20 metres then rattling an upright.

Hat-trick spurned
Esben Hansen kept Jehle involved with a long-range effort which required a save as the Danes continued to dominate without adding to the scoreline. Nordstrand had half a chance to complete his hat-trick ten minutes from time, only to flash an attempt wide from 12 metres. By then the match had long since ended as a contest.