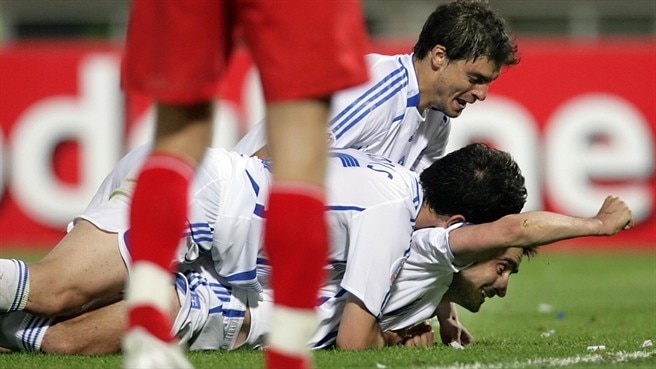 A last-minute goal from Nikolaos Liberopoulos gave Greece a crucial victory over Moldova in Heraklion which extended their lead at the top of UEFA EURO 2008™ Group C to five points.

Late drama
Liberopoulos, a 63rd-minute substitute, reacted quickest to slot home from close range five minutes into stoppage time as he got on the end of Sotirios Kyrgiakos's flick-on. Greece ended the day five points clear of Bosnia-Herzegovina, Turkey - who have played a game less - and Norway. For their part, Moldova remained rooted to the foot of the table with two points.

Breakthrough goal
Theofanis Gekas almost gave the European title-holders a dream start but his effort was cleared off the line by Alexandru Epureanu, before Moldova roused themselves with a Serghei Alexeev shot from distance that was parried by Antonios Nikopolidis. The keeper was in action again on 27 minutes when he raced from his goal to block the danger from Igor Bugaiov. Greece responded to that scare by taking the lead on the half-hour as Angelos Charisteas rose to nod Christos Patsatzoglou's right-wing centre past Nicolai Calancea. The Feyenoord striker also turned provider moments before half-time, crossing for Gekas whose header glanced off the post.

Frenzied finale
Greece seemed content to sit on their cushion in the second period and were shocked by Moldova's equaliser ten minutes from time. Another substitute, Viorel Frunza, ran on to Nicolae Josan's through-pass and blasted in a powerful low shot. Otto Rehhagel's men finally upped the tempo and were rewarded with Liberopoulos's late, late show. Greece will aim to take a step closer to qualification when they visit Norway on 12 September, while Moldova will chase their first victory of the campaign at home to the same opposition four days earlier.