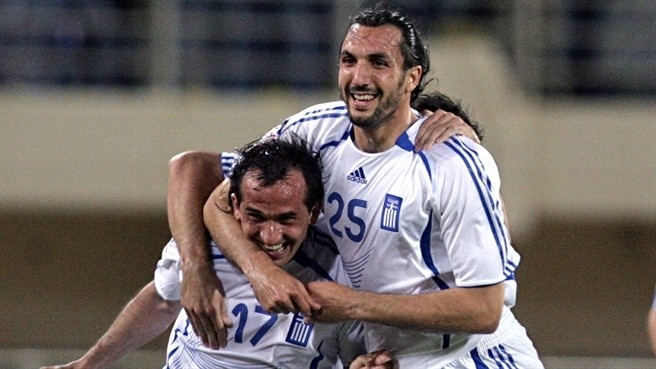 Greece 2-0 Hungary An authoritative first-half showing in Crete helped lift the defending European champions to the top of their section.
Read more

Greece took full advantage of Turkey's slip-up in Sarajevo with a 2-0 win against Hungary putting them top of UEFA EURO 2008™ qualifying Group C.

Assured display
The defending European champions put in an assured display at the Pankritio Stadium in Crete with first-half goals from Theofanis Gekas and Giourkas Seitaridis handing them victory. With Turkey losing 3-2 against Bosnia-Herzegovina, Otto Rehhagel's men are now two points clear at the top of the section.

Gilt-edged chance
Ioannis Amanatidis impressed in a three-pronged attack, chipping narrowly over and shooting wide inside the first seven minutes. Midfielder Georgios Karagounis then drew a brilliant save from Hungary keeper Zoltán Végh before Zoltán Gera missed a gilt-edged chance at the other end, failing to beat goalkeeper Konstantinos Chalkias when through on goal.

Greece rampant
Hungary were made to pay within minutes as Gekas scored the opener, latching on to an Amanatidis cross and swivelling impressively to score with a low shot into the right corner. The hosts continued to attack and a minute before the half-hour mark right-back Seitaridis surged past Gera into the penalty area and fired a powerful, low shot past Végh.

Second half
Amanatidis missed the chance to make it three before half-time when he blasted against the bar from close range. The tempo of the match slowed significantly in the second half but it was Greece who came closest to adding to the scoreline. After 53 minutes Gekas cracked a half-volley against the post after running on to Vassilios Torosidis' deft, chipped pass and Karagounis then saw another long-range shot tipped over superbly by Végh in the closing stages.

Next games
Greece can extend their lead at the top of the section to five points as they play host to Moldova on Wednesday with Turkey not playing again until September. Hungary, in fifth with six points, travel to play fourth-placed Norway, level on ten points with Bosnia-Herzegovina, on the same day.