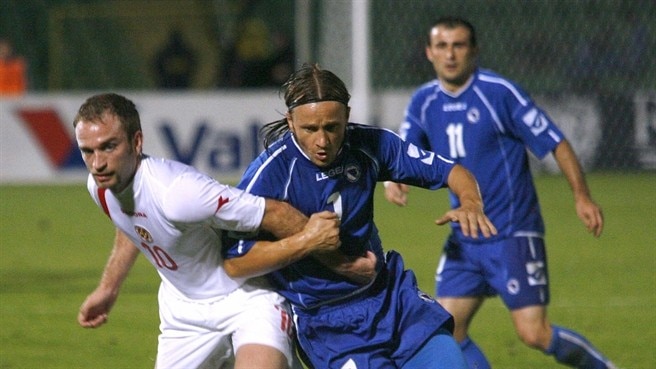 Bosnia-Herzegovina capped a superb week with a hard-fought win against Malta that takes them second in UEFA EURO 2008™ qualifying Group C.

Absent coach
Zlatan Muslimović's sixth-minute goal proved sufficient for the home side four days after their dramatic defeat of Turkey. Bosnia-Herzegovina, led by Ivo Ištuk in the absence of their hospitalised coach Fuad Muzurović, are five points behind leaders Greece but ahead of both Turkey and Norway on head-to-head record. Malta remain sixth.

Early breakthrough
Having triumphed with a last-gasp goal on Saturday, Bosnia-Herzegovina's decisive moment arrived early tonight. Parma FC striker Muslimović was picked out by attacking partner Edin Džeko from the right and he drove his shot high into the net past Mario Muscat. Muslimović almost had a second in the 28th minute when he unleashed a fierce drive from 16 metres which flew centimetres past Muscat's far post. The keeper was tested again on 42 minutes yet was equal to a long-range attempt from defender Vedin Musić. For Malta, frontrunner Ivan Woods posed the biggest threat and he had the visitors' best chance of the opening period with a shot that was punched clear by Adnan Gušo.

Close calls
The second half was a similarly tight affair apart from a five-minute spell when both teams had opportunities to score. First, Malta captain Gilbert Agius let fly a shot from distance which was blocked by Bosnia-Herzegovina defender Boris Pandža on 66 minutes. Muslimović then saw an effort deflected off Brian Said before he was frustrated by a fine stop from Muscat after nodding on a corner from Zvjezdan Misimović. Still, Bosnia-Herzegovina know that wins in Hungary and at home to Moldova in September would leave them within sight of a first major finals.