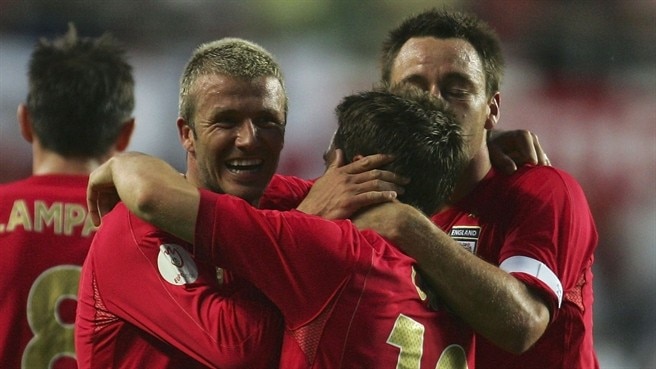 Comeback goals
Cole, whose season has been blighted by injury, produced a low shot to open the scoring and Crouch headed the second thanks to a perfect cross from the recalled David Beckham. The Real Madrid CF man then repeated the trick to provide Owen with his first goal in competitive football since December 2005, leaving England three points adrift of leading pair Croatia and Israel.

Cole strikes
Beckham joined Cole and Owen in making their first competitive international appearances since the FIFA World Cup and the right midfielder came close with a swerving free-kick in the sixth minute. Although Estonia were holding their own, they fell behind late in the first half when Crouch flicked on Wayne Bridge's long throw and Cole, with little space, turned and shot to Mart Poom's left. Frank Lampard headed a Bridge delivery wide, while just before the break England goalkeeper Paul Robinson did well to tackle Vladimir Voskoboinikov when he was sent clear.

Beckham assists
It was 2-0 nine minutes into the second half. Beckham, who had marked his England comeback by setting up John Terry's friendly goal against Brazil on Friday, did it again, Crouch this time stooping to nod in. Just after the hour, another looping Beckham centre was touched in on the stretch by Owen. Beckham, in discomfort due to his ankle, was soon withdrawn but England's work was done ahead of Wembley fixtures against Russia and Israel in September. Crouch will be suspended for the first encounter after a booking here but Wayne Rooney, banned today, will be available. As for Estonia, they will hope their wait for a Group E point and goal ends on 22 August at home to Andorra, Terry having denied them the latter by clearing off the line in added time from substitute Tarmo Kink.